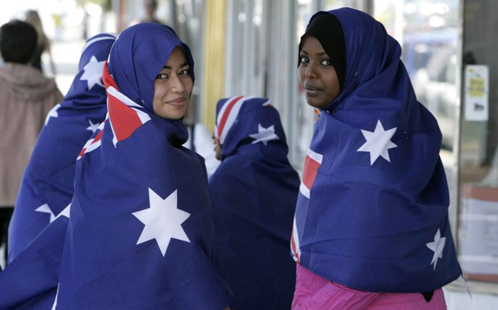 While debate over the merits of Section 18C of the Racial Discrimination Act continues to rage, new research shows that an overwhelming majority of Australians support legislation that prevents insults on the basis of race, culture or religion.

We found (opens in a new window) that just 10% of Australians believe people should have the freedom to "insult" and "offend" people on the basis of race, culture or religion. Over 75% are opposed. The poll, conducted by Essential Research for the Cyber Racism and Community Resilience (CRaCR) and our other Challenging Racism research projects (opens in a new window), undermines other claims that nearly 50% of Australians want the key words removed from Section 18C.

A parliamentary inquiry into 18C is moving towards its climax, with the committee due to report by February 28. It has been a mammoth task for the committee members, with thousands of submissions and dozens of witnesses.

Section 18C makes it unlawful to offend, insult, humiliate or intimidate someone on the basis of race and culture. It has been under attack from conservative commentators and politicians after News Ltd columnist Andrew Bolt was found to have breached 18C without an acceptable defence under the related Section 18D.

In the 2013 election, then prime minister Tony Abbott pledged to get rid of the section. Attorney-General George Brandis attempted to do this in 2014. A strong push-back by community groups forced Abbott to abandon the changes.

After the 2016 election, conservatives such as Cory Bernardi, in tandem with the Institute for Public Affairs, reactivated the campaign to remove section 18C, though limiting their reach to excising the words "insult" and "offend".

As we reported on February 1, the "truth" about what Australians think of and want to happen with 18C has been a matter of critical interest. The Australian newspaper has been a sustained campaigner for removing 18C. It argues the law is too great a threat to freedom of speech.

CRaCR commissioned Essential to include four questions in its February 8 omnibus poll. We asked whether people agreed or disagreed with the propositions that "people should be free to offend/ insult/ humiliate/ intimidate someone on the basis of their race, culture or religion". The finding is that Australians do not support this proposition. Only 5 to 10% champion such "freedoms".

Our simple question formats eschewed any prelude points concerning "competing freedoms" or double-barrel questions as in the Galaxy poll.

After we gave evidence to the parliamentary inquiry, and were questioned on the apparently conflicting findings, we set out to generate transparent and valid data. We developed a simple test to discover the extent to which Australians believe that people should be free to offend, insult, humiliate or intimidate others on the basis of race, culture or religion. This would be the consequence of removing Section 18.

Our research in 2014 asked if people thought it should be unlawful to do what 18C covered. On the insult and offend questions, support for the law was 72% and 66%, while on humiliate and intimidate it rose to 74% and 79%. The IPA claimed since then there had been a major shift towards accepting the removal of these first two conditions of vilification.

Our new research demonstrates this is not the case. Our Essential sample was representative (by age, gender, region and so on). Our four questions were aimed to test whether people supported removing insult and offend from 18C. We found that Australians have increased their support for protections from insulting and offensive attacks on the basis of race, culture and religion.

Only 5 to 10% of Australians support the right to offend on the basis of race, culture or religion. Those who are younger, and males, are more likely to support these freedoms.

In our other surveys over the past decade, we have found that about the same proportion of Australians (one in ten) hold negative views about diversity and "races". For example, around 10-12% believe that some races are superior to others, and that groups should not intermarry. These are indicators of racial supremacism and racial separatism.

There may well be those who support these freedoms from a Voltaire-inspired conviction about the right to offend, insult, humiliate or intimidate. However, analysis of the 2014 CRaCR survey data has found statistical associations between authors of online racism, racist dispositions and a preference for the freedom to offend. Authors of racism, with racist views, most want the right to be racist.

The political implications are also of interest. Focusing just on "offend" and "insult", the spread confirms that the left of the political spectrum is more opposed to licensing hate than the right.

This evidence suggests that over the past three years, despite incessant campaigning by pro-vilification proponents, Australians' appetite for the "right to be bigots" has declined.

The impression we gain is that civility remains a high value. Whatever peoples' valuing of freedom of speech, which is very high, they do not think that such a freedom should encompass the insulting and offending of people on the basis of race, culture or religion.

Moreover, this trend reverberates with the finding of another Essential poll in late 2016, where Australians worry that insulting people on the basis of race and religion is rising.

Now it's over to the committee, parliament and the people.