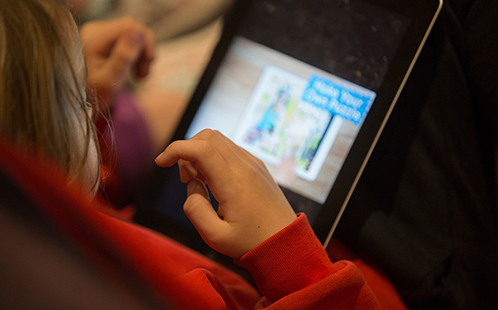 Australia’s first national children’s news and media report, co-authored by Dr Tanya Notley from the Institute for Culture and Society, was officially launched in Sydney today.

The report, News and Australian Children: How Young People Access, Perceive and are Affected by the News (PDF, 2825.85 KB),(opens in a new window) details how 8 -16 year olds in Australia consume and interact with news and media.

It underscores the need for a national direction in addressing media-literacy skills in young people, in light of findings that highlight the difficultly that young people have in knowing the difference between genuine and fake, or unreliable news.

Dr Tanya Notley says the report – which was co-authored by Professor Michael Dezuanni, Associate Director of the Digital Media Research Centre at Queensland University of Technology and Crinkling News – shows just how much young Australians are consuming news.

“Our survey results show us that young Australians are consuming a lot of news. One third of children and two thirds of teens often or sometimes get news from social media sites," says Dr Notley.

"However, many are not critiquing this news they get online or they don’t know how to. Often they are not considering the source of the news story and they are not making any efforts to verify the story."

Associate Professor Dezuanni says: "We need to consider what impact this does and might have on young people’s capacity to participate in society as well-informed citizens.”

Editor of Crinkling News, Saffron Howden, said the report underpins the need for a national focus on media literacy for children.

“This report represents an opportunity to improve young people's understanding of how media works, to develop their critical thinking skills, and to teach them how to filter information to identify what’s accurate,” Ms Howden says.

"It also shows that kids and teens feel under-represented in the media, with little news out there relevant to them. We’re behind the rest of the world in addressing this. We need to catch up to help the next generation become informed and engaged citizens.”

The report's release coincides with Universal Children's Day and was launched during MediaMe,(opens in a new window) the first national news and media literacy conference for kids and teens, hosted by Crinkling News.

The conference features a public debate involving six kids on the topic “The news is not for kids”, streamed live on Facebook from 10am AEDT on Monday, November 20.