Western Sydney University has officially unveiled its $220.5 million flagship campus in the Parramatta CBD – a major economic catalyst that is set to transform Australia's fastest growing city and the broader Western Sydney region.

Opened by the Hon. Gladys Berejiklian MP, Premier of New South Wales, the 14-storey, five-star building is the first vertical campus for the University, and the first of its campuses to be embedded in the heart of a major CBD. The campus, which is home to 10,000 undergraduate and postgraduate students from the University's School of Business and other discipline areas, is one of the most technologically advanced teaching and research spaces developed in Australia and across the world.

The campus is also home to Australia's largest professional services firm PwC(opens in a new window) and government agency WaterNSW,(opens in a new window) connecting thousands of students with business, government and industry and creating more opportunities for work integrated learning, as well as fostering greater research collaborations with a focus on industry impact.

Vice-Chancellor Professor Barney Glover says the official opening of Western Sydney University's first high-rise campus is a major milestone in the University's history, and marks a new era in how it delivers teaching and research and engages with the community. 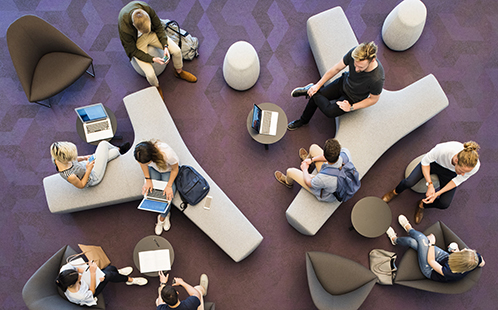 "The Parramatta City campus has been an ambitious undertaking by the University and our partners, Charter Hall, John Holland(opens in a new window) and the City of Parramatta Council. In just two years we have realised our vision to develop a world-leading campus that not only gives our students an enriching and unparalleled learning experience, but which is also deeply embedded in the economic, social and civic life of Parramatta. It is an achievement we are immensely proud of," says Professor Glover.

"Just like its namesake, the Peter Shergold Building will strengthen the University's connection with Western Sydney and its people. The building embodies the spirit of Professor Shergold's public service, most notably his championing of the Western Sydney region and its potential. I can think of no greater acknowledgement of his outstanding leadership than to name this impressive building after him."

Charter Hall(opens in a new window) CEO and Managing Director, David Harrison commented on the milestone.

"1PSQ will deliver to Western Sydney the education facility of the future and Charter Hall is proud to partner with the University, who have been visionary in their pursuit of creating new ways for students to learn," says Mr Harrison.

"As one of the leading developers of education precincts we have gained knowledge by listening to our development partners which will provide us with valuable insights as we seek further opportunities in the education sector." 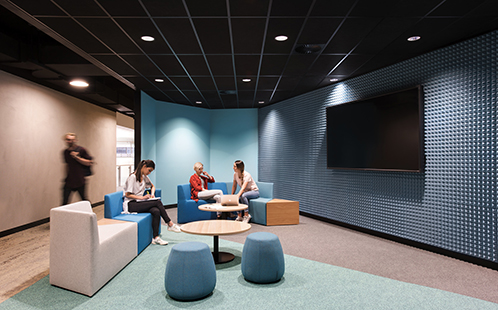 A true 21st century university campus, the building's striking exterior and interior design by firms Architectus(opens in a new window) and Woods Bagot(opens in a new window) dispenses with traditional lecture theatres and encourages innovation, interaction and discovery through the use of smaller, informal learning spaces such as group study rooms with screen sharing and video conferencing, and collaborative learning studios, spread across six floors of the building.

These highly-interactive, digitally-infused studios promote the 'flipped classroom' model of group-based learning, and include an extensive range of features such as writable walls and computers on wheels, through to high-tech cameras and interactive touch screens to allow students to share and compare work around the classroom – all powered by next generation, high-speed Wi-Fi throughout the building.

More than 550 digital screens and information panels are located throughout the campus, including a spectacular 7.5 metre x 1.5 metre curved LED information display which forms the centrepiece of the building's lobby and can be viewed from any vantage point.

Equally as impressive is the digital way finding system, 'Campus Navigator', which, via touch screens, puts information at students' fingertips, providing them with real-time updates on everything from their classroom timetable and available PCs, to weather forecasts and the next bus, train or ferry arrival. 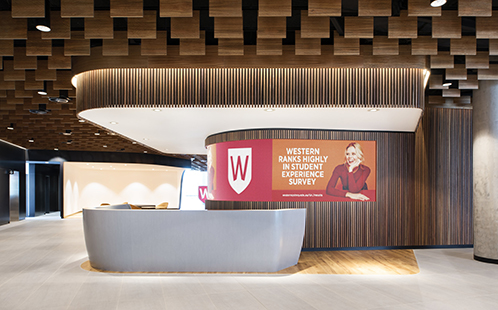 The Parramatta City campus marks the completion of the first phase of the $2 billion Parramatta Square redevelopment – the largest urban renewal project in Australia.

City of Parramatta Council(opens in a new window) Administrator Amanda Chadwick says having a major university campus in the heart of the CBD will be transformational for Parramatta.

"The opening of the Western Sydney University building marks a major milestone for the Parramatta Square project, which will provide a vibrant, activated CBD core with quality commercial, educational, residential and recreational offerings," Ms Chadwick says.