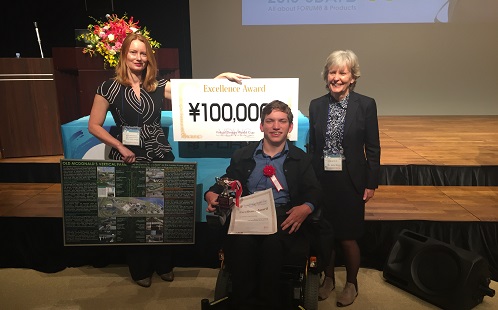 When two Western Sydney University planning students entered a virtual design competition, they never expected they would be jetting off to the capital of technology, Tokyo, to represent their country at the internationally renowned Forum8 Virtual Design World Cup (opens in a new window).

The competition saw Dea Kandasamy and Jacob Cross competing against 53 teams of the best virtual design students from across the globe.

This year the World Cup required students to virtually transform a Melbourne suburb. After thorough research, Dea and Jacob chose to reinvent the average Melburnian suburb into a modern ecosystem which saw food production incorporated into city life. Due to a lack of land space, which is common to most cities, the planning students set their visions to the sky and created a fully rendered computer model of a vertical farm. Their innovative concept provides fresh, healthy local produce for residents while reducing food mileage, thus reducing the carbon footprint.

The Western Sydney University students finished the competition with an Excellence Award, beating the scores of competitors from all over the world.

Dea and Jacob attributed their success to their university degree and the support from their academics within the School of Social Sciences and Psychology.

"My degree at Western Sydney University has given me a great understanding of planning related issues which has been instrumental to our success in the competition," says Dea

"We've learnt about so many interesting case studies from all over the world which have been key to solving social issues within communities. I was able to bring this knowledge to the competition and think outside the box in the creation of our concept".

The planning students believe that the incorporation of vertical farms in our cities would be extremely beneficial.

"In Australia, farmlands that provide food for the major cities are fast becoming housing estates, meaning there is an increasing distance that food travels between farm and plate," says Dea.

"This increasing carbon footprint can be easily reduced if foods are grown closer to where they are consumed. This is how we came up with the name 'Old MacDonald's Vertical Farm'. It's a play in the traditional perceptions that farms are only vast, open spaces with rows of crops. The easy solution in this case is up!"

Dea and Jacob are so delighted that they chose compete in the Forum8 Virtual Design World Cup. They urge all students to go outside of their comfort zone and to push their abilities as invaluable experiences can be gained just by giving things a go.