The following opinion piece by Professer David Rowe, from the Institute of Culture and Society at Western Sydney University, was first published 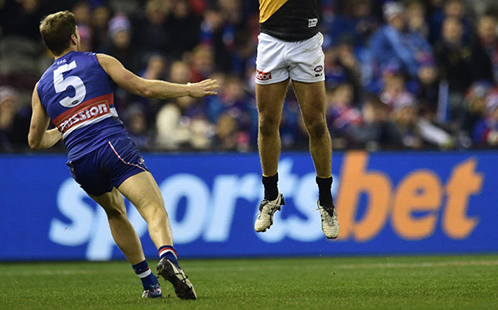 Watching sport on TV may not exactly be a healthy activity, but it should at least do more good than harm. Yet viewers are exposed to all manner of advertising and promotional messages extolling the dubious-but-seductive virtues of alcohol, fatty foods and sugary drinks.

But it is gambling, especially online and mobile, that has come into focus as sport's most potentially damaging byproduct. In 2013, the Gillard government banned the live spruiking of odds thanks to the barefaced over-reach of Tom Waterhouse and Channel Nine.

Now the Turnbull government, while charging the networks about A$90 million less for spectrum access, has banned gambling advertising and promotion on TV for the duration of sports contests until an 8.30pm watershed.

This move stimulated vigorous resistance from sports, media corporations and betting companies. In doing so, they have exposed the ethically questionable foundations of their multiple mutual dependencies.

How sport and TV became 'addicts'

Genuine sports lovers, and those who simply wish to protect the vulnerable from harmfully manipulative messages, may wonder how sport and TV became so dependent on gambling.

There has been betting and wagering on sport as long as someone kept the score. Variously, the practice has been banned, regulated, and taxed. It can be respectable, as in the case of a Melbourne Cup flutter; dodgy, when it involves unlicensed SP betting; and downright criminal, especially when syndicates manipulate results during betting plunges.

But what is unprecedented about gambling on sport today is its astonishing visibility. Where once the logos of betting companies and the odds on sporting outcomes could be largely confined to those interested in such things, they are now impossible to avoid.

Naming rights of stadiums and the surfaces within them, from corner-post flags to players' bodies, carry gambling company logos. TV screens in and outside those stadiums promote gambling, as do streetscapes and other media.

A specific set of developments placed gambling at the heart of contemporary sport and media.

As sport became industrial and commercial in the 20th century, it had a clear interest in doing more than play the role of host to the gambling parasite. By progressively integrating sponsorship by and of gambling into its business model, professional sport made itself more attractive to its main paymaster – the media, especially TV.

Just as sport had become deeply dependent on the media by selling its broadcast rights for an ever more escalating cost, TV needed sport to attract advertising, sponsorship and subscription revenue.

Pay-TV wrested a good deal of premium sport from commercial free-to-air TV (which had previously seized it from public-service TV). It was prevented from monopolising it only by government intervention in the market through the anti-siphoning laws.

But as the proliferation of channels and digital platforms like Netflix fragmented free-to-air audiences and undermined broadcast pay-TV subscriber bases, sport became even more important as media content.

Sport's ever more prominent place in the media enhanced its allure for bookmakers to advertise their wares as an increasingly legitimised arm of the sports industry. This has intensified sport and media reliance on gambling revenue – and so on.

There is no end to this logic of accumulation from the viewpoint of those who benefit from it. The sport-media-gambling triumvirate will push it to its limits.

I heard a clear sense of public disquiet about sport-related gambling when researching the place of sport in the lives of residents of greater western Sydney. Several people I interviewed raised it unprompted as a topic of concern.

It is ironic that at a time when the federal government is trying to restrict the advertising of gambling during sport on TV, it is simultaneously trying to assert its vision of Australian values and culture.

The advertisers who urge sport's ready use as a vehicle for gambling artfully harness traditional Australian characteristics to home in on their most promising targets. They appreciate that many young men like to see themselves as larrikins who laugh off attempts by social engineers to control them. So, they infuse their advertisements and promotional videos with the intoxicating flavour of youthful resistance.

The children who are repetitively exposed to those same messages will not have missed the invitation, when their time comes, to join this expensive club for irreverent smart alecs.

Knowing that association with sport clubs is widely celebrated in Australia, in a perverse distortion of sport club identification online sport betting agencies present signing on with them as membership.

In a rearguard action against tightening controls on gambling during sport broadcasts, sports with billion-dollar turnovers offer up community sport as the sacrificial Australia Day lamb if their earnings are curtailed. But there is little appreciation of the damage done to those same communities when wages, rent and food are charred on the problem gambling BBQ.

TV networks protest that restricting the bird's-eye view they afford to gambling products sold mainly by overseas betting corporations will impair their capacity to tell local stories. They do not seem concerned that their actions will help produce more narratives of the human troubles and tragedies of too many gamblers.

TV companies complain, with some justification, that they are sitting ducks for national regulation when compared with the global online and social media free-for-all. But they, too, have a major presence there through their own websites, Facebook pages and Twitter handles.

TV may be easier to regulate than some other media, but it is still the dominant sport medium. It is the most important place to start when controlling the advertising of gambling through sport, but it is not the end game.

A more comprehensive system of gambling advertising control across media is imperative to prevent current and future generations seeing sport as a medium for gambling.