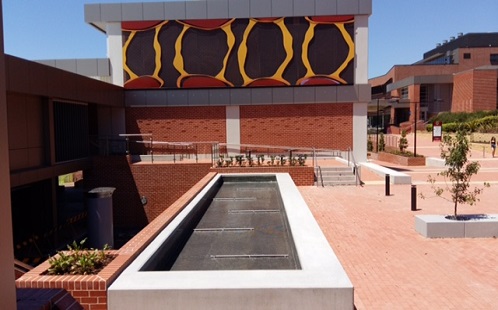 A new year at Western Sydney University will welcome its students back with a freshly renovated plaza at Kingswood campus which will house four new eateries and a space for live music as part of ongoing renovations to improve student experience.

To cater to the crowds of people using the central meeting spot, a shuttle bus shelter has been installed as well as a 15 meter reflective pool accompanied by planted trees to provide shade for those using the area.

"Students enjoy a dynamic landscape with fresh architecture so I think they will appreciate having this new university space to inhabit and make their own," Professor Kevin Dunn, Provost of the Kingswood campus says.

The artwork has been titled Dreaming Tracks to reflect the trails used by Indigenous peoples who would travel together for gatherings as well as dance, song and storytelling ceremonies.

"It's a metaphor for the student experience at Western Sydney University where people meet to exchange knowledge and create an understanding and appreciation of all the many cultures that make up the diverse communities within the broader western Sydney region," Chris Edwards says.

From its concept to its installation, the art piece has been almost a two year process.

Western Sydney University art curator, Monica McMahon says it is tradition for the University to commission a new artwork into any large scale refurbishments.

The refurbishments were completed in December 2016 in time for the autumn session commencing on the 20th February.

The lively student plaza will also double as an area for public events such as live music and other acts.

"This will have a big impact on campus life because of the greater numbers and density the space will provide. This is important because it improves the economics for more service provision, and will enhance public and personal safety," Professor Dunn said.