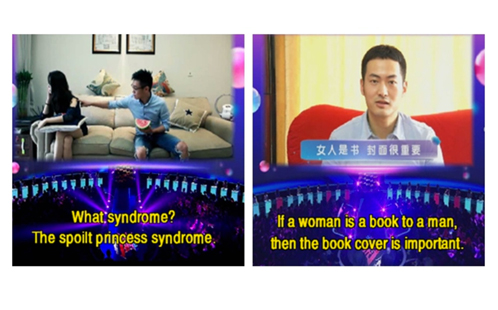 The translator of the popular SBS dating show If you are the one will discuss how she solves linguistic and cultural challenges at a public talk at the Australia- China Institute for Arts and Culture.

Over the last two decades, the head of SBS Subtitling Department, Dr Jing Han from Western Sydney University, has subtitled more than 300 Chinese films and TV programs, including Crouching Tiger, Hidden Dragon, Lust, and If You Are the One.

At a special event at the University's Parramatta campus on Tuesday July 25 at 4pm, Dr Han will discuss the complexities associated with translating two very different languages.

"When you translate a language, you are also translating its culture, and it's important to not just translate the words themselves, but also their cultural context," says Dr Han.

"A good example is 癞蛤蟆想吃天鹅肉 – 'A toad craves for swan meat.' For the Chinese audience, the cultural and cognitive context for this saying is given in a known fable of the toad and the swan, but such a context is missing for the English speaking audience."

"In the context of how this was uttered, I translated this into: 'Just as a toad craves for swan meat, an ugly man gets a pretty girl.'"

Dr Han says a metaphor in the source language often needs to be swapped.

"In this sentence, 你要没让树挂住，就挂了, the literal translation is 'If you weren't caught by a tree, you'd be dead'; however, the pun using the homonym of 'gua' and 'gua' is missing in the translation, and the humour intended from the pun is lost," she says.

"So I came up with a different homonym in English which serves a similar purpose, 'If you missed, you'd be missed.'"

For more information about the public lecture, please visit the Australia-China Institute for Arts and Culture website.