The following opinion piece by Dr Ian Wright from the School of Science and Health was first published (opens in a new window) in The Conversation. 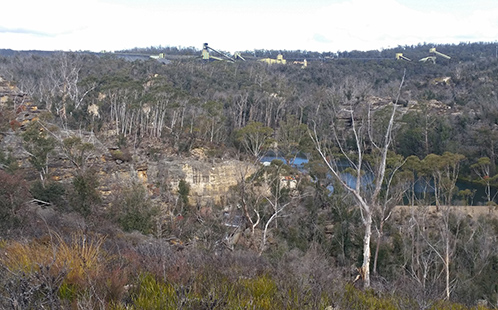 The Wollangambe River in New South Wales is a unique gift of nature, flowing through the stunning Wollemi National Park, wilderness areas and the World Heritage-listed Blue Mountains. It's an adventure tourism hotspot, with thousands of people clambering through the river's majestic canyons each year.

So it was with a sense of irony that bushwalkers noticed unnatural flow and discolouration in the river and suspected it was pollution. In 2012 they contacted Western Sydney University, which has since conducted ongoing investigations.

The pollution was traced back to the Clarence Colliery, owned by Centennial Coal. Our recent research confirms that this is one of the worst cases of coal mine pollution in Australia, and indeed the world.

For four years I and other researchers have been investigating the pollution and its impacts on the river. The NSW Environment Protection Authority (EPA) has verified our findings. In exciting news, the mine was in March issued a revised environmental licence, which we believe is the most stringent ever issued to an Australian coal mine.

This is appropriate given the conservation significance of the river and the current scale of the pollution. We are now hopeful that the pollution of the Wollangambe River may soon be stopped.

Water pollution damages the river and its ecology

The Clarence Colliery is an underground mine constructed in 1980. It is just a few kilometres from the boundary of the Blue Mountains National Park.

Our research revealed that waste discharges from the mine cause a plume of water pollution at least 22km long, deep within the conservation area. The mine constantly discharges groundwater, which accumulates in underground mines. The water is contaminated through the mining process. The mine wastes contributed more than 90% of the flow in the upper reaches of the river.

The EPA regulates all aspects of the mining operation relating to pollution. This includes permission to discharge waste water to the Wollangambe River, provided that it is of a specified water quality.

Our research found that the wastes totally modified the water chemistry of the river. Salinity increased by more than ten times below the mine. Nickel and zinc were detected at levels that are dangerous to aquatic species.

We surveyed aquatic invertebrates, mostly insects, along the river and confirmed that the mine waste was devastating the river's ecology. The abundance of invertebrates dropped by 90% and the number of species was 65% lower below the mine waste outfall than upstream and in tributary streams. Major ecological impacts were still detected 22km downstream.

We shared our early research findings with the NSW EPA in 2014. The authority called for public submissions and launched an investigation using government scientists from the NSW Office of Environment and Heritage. Their study confirmed our findings.

Progress was interrupted when tonnes of sediment from the mine were dislodged in 2015 after heavy rainfall and the miner and the EPA focused on cleaning the sediment from the river. This incident has resulted in the EPA launching a prosecution in the NSW Land and Environment Court.

We recently compared the nature and scale of pollution from this mine with other coal mine pollution studies. The comparison confirms that this is one of the most damaging cases of coal mine water pollution in Australia, or internationally.

Even 22km below the waste outfall, the Wollangambe is still heavily polluted and its ecosystems are still degraded. One of the unique factors is that this mine is located in an otherwise near-pristine area of very high conservation value.

The new EPA licence was issued March 1, 2017. It imposes very tight limits on an extensive suite of pollutant concentrations that the mine is permitted to discharge to the Wollangambe River.

The licence covers two of the most dangerous pollutants in the river: nickel and zinc. Nickel was not included in the former licence.

The new licence now includes a sampling point on the river where it flows into the World Heritage area, about 1km downstream from the mine. The licence specifies vastly lower concentrations of pollutants at this new sampling point.

It can be demoralising to witness growing pollution that is damaging the ecosystems with which we share our planet. This case study promises something different.

The actions of the EPA in issuing a new licence to the mine provide hope that the river might have a happy ending to this sad case study. The new licence comes into effect on June 5, 2017.

Our current data suggest that water quality in the river is already improving. We dream that improved water quality, following this licence, will trigger a profoundly important ecological recovery. Now we just have to wait and see whether the mine can improve its waste treatment to meet the new standards.