Higher education reforms are all about savings and not possibilities

The following article by Dr Andy Marks, Assistant Vice-chancellor, was first published (opens in a new window) by Fairfax Media. 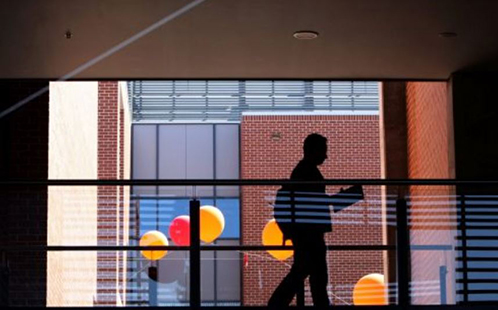 A Senate impasse and yet another round of higher education reforms are floundering. Only they aren't. Reforms that is. Australia hasn't seen anything remotely approaching meaningful higher education reform in nearly a decade. And the newly released "Shifting the Dial" Productivity Commission report neither tweaks or even nudges government towards meaningful reform in this nationally critical area.

Affording students increased consumer law protections, as the report suggests, is an entirely reasonable thing to do, but is hardly a suggestion that qualifies as big picture thinking. I mean, really: is that it?

These unimaginative ideas arise from an entirely different set of preoccupations that bear no resemblance to reform. This is solely about efficiencies, the budget and what is unabashedly, a transactional view of education.

This myopia is not confined to the terms of commissioned analysis, it abounds in parliamentary discourse on thwarted reform agendas. Yet government just don't get it or simply refuse to believe it. The default response is to blame others for the vacuum of imagination.

With his legislative plans scuppered, Education Minister Simon Birmingham lashed out at the "appalling" Greens-Labor-Xenophon "troika". But like his predecessor, Christopher Pyne's defeated bills, and Labor's rush to cut $2.3 billion from universities in 2013, these plans were derailed because they lacked depth. They were all about savings and nothing to do with possibilities.

This is the negative standpoint from which our politicians – on both sides – stare down, rather than support education.

Far from being viewed as our best hope to ride, rather than be swamped by, the crashing waves of disruption, higher education has been looked at as a problem. Something to be reined in, and certainly not encouraged.

Respective governments, Coalition and Labor alike have fallen over themselves, literally, to defuse the very "ideas boom" they both claimed to have sparked.

Instead, they are happier searching for efficiencies on top of efficiencies. In government's limbering-up prior to its latest "reform" swan dive, universities were not consulted.

Instead, their leaders were called to the minister's office for a mysterious briefing on a cold 2017 budget eve. We are cutting $2.8 billion in Commonwealth funding, vice-chancellors were informed. Plus, we will withhold an additional 7.5 per cent of your funds at the minister's discretion. Oh, and we won't tell you what you need to do to get it back. Sure. No worries. Right?

The government were convinced universities deserved a punitive financial hit far bigger, proportionally than that reserved for the budget's other villains, the big four banks and Catholic schools.

Forget that our universities are the country's largest services exporters. Disregard the fact they have generated more than two-thirds of the nation's start-ups. And don't even bother to consider the central role they perform in conducting transformative research or addressing Australia's monumental labour market dislocation and industry transition challenges. Just give them a haircut.

If it is only a matter of savings, then fine, say so. But do not call it reform. Because reform is a progressive, transparent and deliberative exercise, one that recent Australian governments simply don't appear to be up to.

Strangely, the global push for serious reform is not as reticent, and not nearly as fearful. In fact it's positively ambitious. Across the ditch, newly anointed prime minister, Jacinda Ardern is set to offer New Zealanders three years of fee-free tertiary education. Her British Labour counterpart, Jeremy Corbyn, came back from the brink with a promise to abolish university tuition fees.The reform verve has not just gripped the political left. British Minister for Universities Jo Johnson – Boris' brother –is busy talking up fines for institutions deemed to be quashing free-speech or worse, overpaying their vice-chancellors. Johnson's boss, embattled British Prime Minister Theresa May even signalled a comprehensive review of higher education at the recent Conservative Party conference.

It's not like these governments don't have enough to do. In Brexit, Britain is engaged in the most complex political divorce the modern world has seen. Still, higher education is seen as sufficiently important to the broader national interest to warrant considered and consultative attention.

If true reform is a prospect so readily embraced by the rest of the world, then why, oh why can't we? A review, the first step on this path, is all Xenophon MP Rebekha Sharkie called for when she explained her Upper House colleagues' decision to reject Birmingham's "reforms".

It's not as though we haven't done so before. Some of the most purposeful and impactful advances in Australia's socioeconomic fortunes came on the back of expansive higher education reform. Under Menzies then Whitlam, our universities enjoyed their most pronounced period of maturation and expansion. The flow-on into broader society still resonates across generations. That's what's possible with genuine reform.

Through the '80s and '90s education ministers from both sides ushered in further structural changes. All important in sustaining the positive momentum. The last major blushes of reform came with the 2009 removal of caps on the number of students universities could enrol. Quality higher education has been opened up to, among others, record numbers of Australians from socioeconomically disadvantaged backgrounds.

These policies have real impact. They transform lives. They build labour market capacity. They position Australia to succeed in an increasingly competitive, unstable and challenging world. Reform isn't navel gazing; something to be rendered an afterthought to fiscal imperatives. Nor does that approach reflect our political lineage.

For more than 50 years up until recently, Australian governments, Coalition and Labor prioritised higher education reform in the nation's interest. In the years since: nothing. Through the clamour of four prime ministers and three parliaments, Senate crossbenchers have – to date – justifiably refused to pass "reforms" that don't deserve the mantle. If government wants to cut, then mount an argument for a cut and make it a good one. If it wants to reform, then let's talk. But let's have a truly inclusive, evidence-based and wide ranging review, instead of economic dial shifting. This is what our higher education system deserves and Australia simply cannot afford to wait.