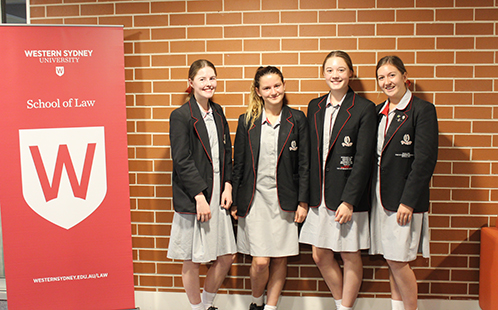 The third annual Kirby Cup Moot Court Competition saw the culmination of an intensive two-week period during which 24 High Schools participated, debating about the nuances of Australian Immigration Law.

Year 10 students from Queenwood School For Girls took out first place after presenting a strong case in the finals against Hornsby Girls High School held at Parramatta Family Court.

The hypothetical case was drafted by Jason Donnelly from Western Sydney University’s School of Law and involved an appeal against a decision to cancel a permanent residency visa.

Students were questioned on their understanding of some of the finer points of law by Honourable Michael Kirby AC CMG who is the patron of the competition.

Students presented the bench with previous cases that Justice Michael Kirby had ruled on. Honourable Michael Kirby AC CMG agreed that some of those findings were excellent.

This year, the competition was opened to schools outside the Greater Western Sydney area with teams of students as far as Coffs Harbour competing.

The bench was unanimous in finding that Queenwood School for Girls presented the stronger case and were successful in winning.

Both schools were commended on the strength of their understanding of the case and the laws they presented.