The following opinion piece my Dr Andy Marks, Assistant Vice-Chancellor of Western Sydney University, was first published (opens in a new window) in The Daily Telegraph. If you want a job done, Scott Morrison is your man. He has ­reintroduced limits on the number of students universities can enrol in the midyear budget update — cutting an estimated $2.1 billion from Australia’s most proven and effective ideas generators; our universities.

He has successfully defused his government’s own “ideas boom”.

It’s not the Christmas message we got from the PM in December 2015.

Full of Yuletide cheer Malcolm Turnbull committed to $1.1 billion to science and innovation to “drive Australian prosperity in the years ahead” and help the economy transition away from the mining boom.

That’s exactly the kind of transformation we need in Western Sydney, where large scale manufacturing dominates. Just ask the government.

Along with their state colleagues, they’ve invested billions in projects — an airport, roads, hospitals and other infrastructure — that are meant to drive that shift.

They’ve encouraged industry, including defence giant Northrop Grumman and others to set up shop alongside the airport they’ve promised will be a knowledge jobs hub; an “aerotropolis”.

How will freezing university enrolments in Western Sydney bring about the monumental skills-uplift required in the region’s labour force?

How will demanding nurses, teachers and ­social workers pay more of their HECS debt sooner help deliver the frontline services the region so desperately needs?

The same dedicated people who already can’t afford to live near where they work.

A Centre for Western Sydney report released earlier this year showed “bachelor degree attainment among young people in Western Sydney is 40 per cent lower than elsewhere in Greater Sydney (10.2 per cent compared to 16.7 per cent). The government’s freeze on funding shows they are OK with that imbalance.

That is what this pre-Christmas statement is doing. It’s saying: we asked you to come with us on an ­innovation push, a nation-changing vision, a critically important transformation. We urged you to be “lifters not leaners”.

But now we’ve decided it wasn’t that important after all.

Government defines one-quarter of Western Sydney University’s 44,454 students as being of “low socio-economic status”. Just over 60 per cent of them are the first in their family to go to university. We are one of the country’s most culturally diverse institutions.

If it’s all about transition, it’s hard to imagine a bigger change. But the journey is far from over.

A Centre for Western Sydney report released earlier this year showed “bachelor degree attainment among young people in Western Sydney is 40 per cent lower than elsewhere in Greater Sydney (10.2 per cent compared to 16.7 per cent)”.

The government’s freeze on funding shows they are OK with that imbalance.

It tells us the Treasurer does not see a problem in Western Sydney lagging, nor does he view that inequity as putting government’s jobs growth targets and ­infrastructure investments at risk.

Maybe pulling $2.1 billion out of education will allow the Treasurer to put the funds to something he feels is of better use. There’s a state government looking to build a few stadiums. 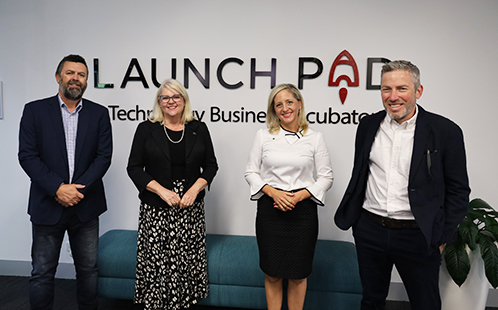