Moving autism on TV beyond the genius stereotype

I am watching Sesame Street with my two boys, aged 11 and 13. Admittedly they're a bit old for Elmo and Big Bird, but this is a special occasion. It is the debut episode for the television show's newest Muppet on the block, Julia, a sweet four-year-old preschooler with red hair, a wide smile and autism.

When I told my eldest son that Sesame Street was launching a Muppet with autism, he replied, "Are they even allowed to do that?" He had never seen a character on children's TV who, like him, was on the autism spectrum. He wondered if Julia was taboo or controversial, and his reaction indicated to me that Julia's arrival was long overdue.

It turns out Julia is just one of the gang. She has her quirks and these are brought to light in the "Meet Julia" special episode, which aired on April 10. Julia takes a while to answer questions, flaps her hands and is sensitive to loud noises. But the other Muppets quickly learn what makes her tick and she is accepted for doing things "just a little differently, in a Julia sort of way."

Her introduction represents an encouraging cultural shift. Arts culture, including picture books and television, if managed appropriately, can have a positive effect on the psychosocial development of children, teaching them how to empathically interact with peers on the spectrum. The arts can also help children with difference to identify with likeminded characters, engendering a sense of connection and wellbeing. Until now, however, children's TV has not represented autism's increasing prevalence, or the need for improved awareness and understanding.

Isolation is of particular concern for children on the autism spectrum, who may have difficulty making friends and are prone to bullying, often leading to mental health issues. One study indicated that 63% of children on the spectrum had been bullied in their lifetime, with 38% bullied in the past month.

Sesame Workshop, the non-profit organisation behind Sesame Street, states that bullying was a key motivator for the introduction of Julia. It also claims that nearly every family is affected by autism in some way. In Australia, it is estimated that one in 100 people (around 230,000) have an autism spectrum disorder, while in the United States, this figure sits at around one in 68 people. Such statistics are further compounded when taking into account how autism touches family, friends, teachers and colleagues.

Adults and teens have enjoyed a steady increase in fictional characters since Dustin Hoffman's memorable and groundbreaking portrayal of Raymond in Rain Man in 1988. Unfortunately, though, this film also created an unhelpful stereotype of people on the spectrum having an uncanny recall for facts and savant-like skills. But characters like Julia pave the way for more inclusive portrayals of autism.

It took Sesame Workshop five years and consultation with more than 250 autism organisations and experts to develop Julia, who actually first appeared as a digital storybook character for the autism initiative See Amazing in All Children. The creators of Julia chose a female character because autism is less understood in girls and diagnosed less frequently.

In her debut TV appearance we find Julia alongside fellow Muppets Elmo and Abby, who are finger painting. Julia is using a paintbrush because she doesn't like the feeling of paint on her hands. This is typical of kids on the spectrum who may be over-sensitive to textures, sights, sounds, tastes or smells.

The episode sets a tone of inclusion from the beginning, when Elmo and Abby say to Big Bird, "this is our friend Julia". But friendship does not come quite so easily to Big Bird. He introduces himself and asks to see Julia's painting, but she is concentrating intently and does not look up. Alan, the only human in the scene, explains, "Sometimes it takes Julia a little while to answer. It helps to ask again." This is a small suggestion, but one that is very important and helpful.

When Julia eventually shows her artwork, exhibiting obvious creative flair, Big Bird tries to give her a high five, but Julia turns away. Big Bird feels dissed and thinks that Julia doesn't like him.

This nuanced reaction is where Sesame Street's years of research shines through. I love that Big Bird is sensitive and slightly put out, because this is the reality of interacting with a person on the spectrum. It can take patience and understanding, something that is tricky for busy children in a playground. Sometimes, a neurotypical person (a term used by the autism community to describe non-autistic people) may feel affronted or that they are being ignored. 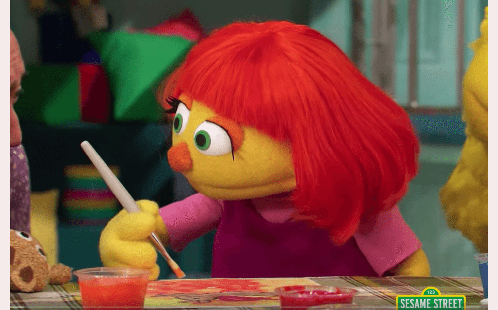 While it takes Big Bird a little while to catch on, he and Julia eventually find some common ground, which brings home the affirming message of the episode. The most touching moment for me was when Alan takes Julia to her favourite spot to calm down after a noisy ambulance drives by. They sit together on a quiet balcony high above the street where even lofty Muppets like Big Bird look small.

"I love this view," Alan says to Julia. "Everything seems different from up here doesn't it?" The metaphor is profound and strangely reassuring.

Upon watching the episode, my son commented that he was pleased Julia's autism was mentioned, but wasn't made out to be a big deal. It was simply a part of who she was. He identified with some of Julia's traits, such as being sensitive to sounds. "Elmo's squeaky voice would drive me mad if I were her," was one comment. Overall, he was heartened by the episode. I noticed he had a small smile on his face while watching it and afterwards he said that it was great that shows were becoming more diverse and autism was being normalised.

The "Meet Julia" episode was not completely perfect, however. In the program that went to air, Julia's introduction was followed by a series of short pieces on the theme of friendship and kindness. Such focus on the importance of making and keeping friends is an odd choice, given that children on the spectrum have such a hard time doing just this. I wondered if it could make them feel inadequate or alienated, although a couple of the segments did provide some good tips around play.

It is also a shame that Julia is not more expressive in her language. But her quietness is part of her character and one that is apparent in some kids on the spectrum. I have read comments that Julia is not typical of someone with autism, but I disagree and believe it is impossible to conjure up one representative of such a complex neurological condition. Autism constitutes a vast spectrum and presents differently in every individual.

While I would have loved Julia to be introduced a decade ago, when my boys were toddlers, her arrival now at least paves the way for more children's characters with autism.

Dustin Hoffman's character in Rain Man was largely responsible for introducing many people to autism, but also the unhelpful "genius" stereotype.

Many cultural references have since replicated this notion, including Mark Haddon's (2003) book The Curious Incident of the Dog in the Night-Time about a 15-year-old brilliant, but socially inept mathematics whiz. Similarly, Graeme Simsion's best-selling book The Rosie Project (2013) explored the humorous relationship slip-ups of genetics professor Don Tillman; and David Williamson's (2017) recent play Odd Man Out covered similar terrain around the love life of an astrophysicist.

While all of these examples have contributed to the awareness of autism, where are the ordinary characters? The ones with learning difficulties who do not go on to become brilliant? The characters whose social challenges are not counterbalanced with freakish IQ levels? It is encouraging to see that the new Power Rangers movie features a character with autism, Billy the Blue Ranger. But he is, well, a superhero. The Disney TV series Girl Meets World recently explored the possibility of its precocious character Farkle being on the spectrum, but again drew on stereotypes, focusing on Farkle's genius qualities.

An interesting and arresting portrayal of a TV character thought to have high functioning autism, also known as Asperger's syndrome, is Saga Noren in the Scandinavian crime series The Bridge (or Sonya in the US remake). Saga appears to be emotionally detached, takes things literally and is ruled by rules, making her an astute, if not socially awkward, police detective.

While she is not expressly described as having autism in the series, her colleagues make reference to her difference and she has reportedly become a role model for some women on the spectrum. Saga is a kooky and endearing character and while it could be said that she lacks empathy, her curiosity about relationships and social cues paints her in a sensitive light.A less dark and creepy series is Parenthood (2010-2015) about the Braverman family in California. Max Braverman is diagnosed with Asperger's early on in the series, at the age of eight.I remember watching the episode where Max's parents react to his diagnosis, identifying with their sense of confusion and feeling a little less isolated for it. My son has watched a couple of Parenthood episodes on Youtube, also finding it affirming and believable. Max is a complex, evolving character who navigates life on the spectrum, meltdowns and all. He isn't always likeable, but the show gives viewers an insight into his unique outlook and what life on the spectrum might be like for individuals and their family.

Protagonists with autism help to demystify what has long been a stigmatised condition. But we are setting up unrealistic expectations if characters do not represent the everyday fabric of society, albeit in the form of a Muppet.

If children can find a little bit of themselves or their friends in characters on the screen or in books, they can see autism from a different perspective. They can see that characters like Julia needn't be taboo or controversial, but rather, merit acceptance and inclusion.