The following article, co-authored by Matthais Boer, from the Hawkesbury Institute for the Environment, was first published in The Conversation (opens in a new window). 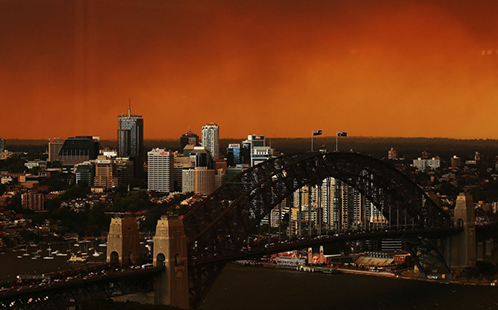 It might feel like the depths of winter, but Australian fire services are preparing for an early start to the bushfire season. Sydney has been covered with smoke from hazard reduction burns, and the New South Wales Rural Fire Service has forecast a "horrific" season.

Predicting the severity of a bushfire season isn't easy, and – much like the near-annual announcements of the "worst flu season on record" – repeated warnings can diminish their urgency.

However, new modelling that combines Bureau of Meteorology data with NASA satellite imaging has found that record-setting July warmth and low rainfall have created conditions very similar to 2013, when highly destructive bushfires burned across NSW and Victoria.

Crucially, this research has found we're approaching a crucial dryness threshold, past which fires are historically far more dangerous.

How to measure bushfire fuel

On September 10, 2013 several bushfires in Sydney's West caused havoc well before the official start of the bushfire season. These were a precursor to fires that destroyed more than 200 properties a month later. Warm, dry winter weather had dried out the fuels in Sydney's forests and bush reserves beyond "normal" levels for the time of year.

The timing and severity of those preseason fires were a reminder that the region's forests are flammable all year round; they can burn whenever the fuel they contain dries out past a certain threshold.

In most forests, there is an abundance of fuel in the form of leaf litter, dead twigs, branches and logs, lower vegetation such as shrubs and grasses, as well as higher foliage and branches.

The flammability of all these different kinds of fuel depends largely on their moisture content. Leaf litter and fine dead branches on the soil surface can dry out in a matter of days, whereas logs may take weeks or months to lose their moisture. The moisture content of shrubs and tree canopies varies depending on the amount of water in the soil, so they reflect the overall rainfall and temperatures across a whole season.

The flammability of an entire forest is therefore a complex calculation of all these different kinds of fuel (both alive and dead) and their different moisture levels.

In a recent collaborative study, we combined data from a Bureau of Meteorology project that maps water availability levels across Australia with satellite imagery to develop new tools for mapping and monitoring moisture levels of different fuels in forests and woodlands.

We checked these tools by modelling fuel moisture levels during fires in NSW, Victoria and the ACT between 2000 and 2014, and comparing our predictions to historical bushfires.

Our research has identified critical dryness thresholds associated with significant increases in fire area. Rather than a gradual increase in flammability as forests dry out, when dead fuel moisture drops below 15% subsequent bushfires are larger. Another jump occurs when dead fuel moisture levels fall below 10%. We found similar thresholds in growing plants, although their moisture content is measured differently.

These dryness thresholds are pivotal, because they may represent the breakdown of moist natural barriers in landscapes that prevent fires from spreading. Understanding these mechanisms makes it possible to predict fire risk much more accurately.

As part of this project we compared the fuel moisture in Sydney Basin's forested areas in 2013 and 2017. As shown in the chart below, currently the live fuel moisture level is tracking well below the 2013 values, and is approaching a crucial threshold (indicated by the dotted line).

The moisture content of dead fuel has been more variable, but it has also dipped below the 2013 curve and, if warm dry weather continues, could reach critical levels before the end of August. 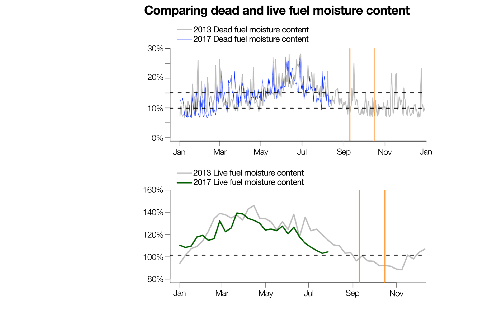 In another worrying sign, mapping shows critically dry live fuel is much more abundant in 2017 than it was in 2013. It's clear that much of the Sydney Basin is dangerously primed for major bushfires, at least until it receives major rainfall. Forecasts for windy but largely dry weather in coming weeks may exacerbate this problem.

These new insights into landscape-scale fuel dryness provide a powerful indicator of what might be expected. They also build our capacity for week by week monitoring of fire potential.

Preparation by both fire management authorities and exposed homeowners is now an immediate priority, to cope with the strong likelihood of an early and severe fire season.