The following opinion piece contributed by Professer Phillip O'Neill, from the Centre for western Sydney, was first published The government is committing to more than A$70 billion in new infrastructure spending to 2020-21. This includes up to A$5.3 billion for the Western Sydney Airport, and A$8.4 billion towards the Melbourne to Brisbane inland rail link. Another A$500 million will be put towards passenger rail in regional Victoria, A$844 million for upgrades to the Bruce Highway in Queensland, and A$1.6 billion for road and rail in Western Australia.

A A$1.5 billion Skilling Australians Fund will be created to fund apprenticeships and traineeships. The fund will be supported by a levy on businesses with turnover greater than A$10 million that employ foreign workers.

The government has also committed to provide $101.5 million over five years to create an Advanced Manufacturing Fund, to promoted high-technology manufacturing.

To alleviate increasing energy costs, a one-off Energy Assistance payment will be will be given to pensioners and disability support recipients over two years. Single recipients will receive A$75 and couples A$125, at a cost of A$286.9 million. The government will also remove the capital gains tax exemption for foreign and temporary tax residents, and allow prospective first home buyers to make voluntary contributions to superannuation that can be withdrawn for a first home deposit.

The budget won't fix the cost of living

A rise in the cost of living is usually represented by an increase in the Consumer Price Index (CPI) over a quarter, year or decade depending on the issue of interest. The CPI is designed to measure changes in the cost of a "basket of goods and services" that a "typical" Australian household might buy.

Almost half of the current basket is made up of housing, transport and food costs. So movements in these prices have a relatively big impact on the cost of living. But the ability of the federal government to control house prices or the other major component of housing costs - electricity and gas - is very limited. And petrol and food prices are determined by national and international market forces. 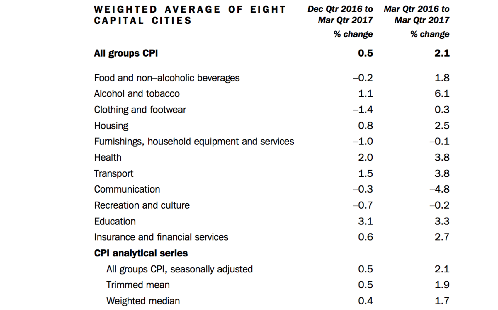 The above figure shows how the prices of components of the CPI changed over the year to March. The greatest price increases have been for alcohol and tobacco, which are largely due to government "sin taxes". One of the easiest ways to ease cost-of-living pressure on the poorest households would be to reverse these tax rises, but this is not on the agenda.

The government also has great potential to influence costs in areas for which it is a major funder such as in health and education. These are also areas where prices have been rising faster than the CPI.

In education, the additional A$18.6 billion over the next decade for schools funding, which is needs-based, should reduce cost of living for more disadvantaged households, although some middle-income households might be worse off.

But the cost of living will rise for university students, as fees rise by 1.82% per year over the next four years. Those with HELP debt on lower incomes will also come under pressure, as the threshold to pay off their loans is reduced to A$42,000 per year.

In health, the re-indexation of the Medicare rebates from this July for regular GP visits, the further reduction in the price of prescription drugs, and scrapping of the 2014 proposal to raise prescription charges by A$5 will all help with the cost of living for those on lower incomes.

Although really a tax increase, the increase in the Medicare levy, by 0.5% from 2019, will nevertheless reduce the standard of living of households on middle to high income.

Decision-making about infrastructure in Australia reached a new level of incompetence on budget night. Much public money has been committed, and the list of projects is long. Yet the planning and evaluation process for identifying what assets should be built and how their roll-out should be staged remains dreadfully inadequate.

Infrastructure is expensive and imposing. Governments need to select projects well, because when we select a project to build we also decide not to build a competing project. Construction then needs to proceed efficiently and with minimal impact.

Good infrastructure delivers benefits over many decades. Some infrastructure assets – like those for the delivery of water, energy and telecommunications – deliver direct benefits to consumers so they can be funded by user charging, which in turn means some degree of commercialisation of the asset is possible.

Infrastructure also makes our cities more productive and better, safer places to live. These positive externalities are not easily commercialised; but when a project is a good one because there is widespread benefit we are happy for governments to borrow and our taxes to be used to pay down the debt. The presence of good public infrastructure, like good public health and education, marks us as a civilised people.

Getting the right balance of commercial benefits and positive externalities isn't easy. Infrastructure roll-out needs informed choice and, therefore, engaged public debate. But infrastructure decision-making in Australia lacks both information and debate. The secrecy in Australia surrounding infrastructure – be it for new construction or the sale of brownfields assets – is appalling. Business cases are rarely made public. The claimed benefit-cost ratios are not able to be scrutinised. Project financing and construction schedules are never revealed. Construction contracts are deemed "commercial-in-confidence", as are the complex sale contracts of existing public assets.

Sadly, the budget gives little hope that any of this will change.

There's more than a touch of back to the future about this budget: we've got so-called nation-building projects and the usual cries of "What about me?" from various state premiers. But in the current world of "good debt" and "bad debt", the infrastructure choices of Budget 2017 look more defensible than usual.

For a start, there's plenty to like about the $5.3 billion commitment to Western Sydney airport: the project has bipartisan support; it's been assessed as having benefits of $1.90 for every dollar it costs; Infrastructure Australia thinks it's a high priority; and, after 30 years on the drawing board, nobody could say it's a thought bubble.

Inland Rail may squeak over the line. Despite an equity investment of $8.4 billion, the project has a marginal business case at best, with benefits of just $1.10 for every dollar spent and all the risks on the downside. Indeed, plenty of experts are dubious about the merits of this project.

Don't listen too much to the political theatre about which states have been dudded in the carve-up of infrastructure dollars. In the end, more than half of what the Commonwealth grants for transport infrastructure is effectively neutralised when the winning states end up with a lower GST share. WA has been singled out for a particularly large $1.6 billion package in this budget, but that will only matter if the Grants Commission is asked to quarantine it from affecting WA's GST share. New South Wales and Queensland - as usual - get a bigger share of the infrastructure pie than the commission says they need, but their lower GST share in subsequent years unravels more than half of their ostensible advantage.

The lost innovation agenda for industry

Wealth has to be created before it can be distributed. Unfortunately, this message has not been heeded but the current government.

The budget is high on rhetoric about deficits and the importance of runways, roads and rail but still low on supporting the innovation ecosystem that is needed to transform Australian industry. The government should be playing a role to stimulate the transition to new technologies. It should provide industry with the confidence to launch new products and technologies.

Overall, there has been a reduction in spending on programs dubbed in the budget "Growing Business Investment and Improving Business Capability" by A$93 million. The government has missed the most important form of investment – the networks of people and institutions that drive innovation.

There is funding for Industry Growth Centres (from A$37 million to A$61 million) and the Entrepreneurs' Programme (A$79 million to A$106 million) but these measures have been matched by cuts. Two measures stand out in these cuts. First is assistance to pivot businesses out of car and clothing to other manufacturing sectors (down by A$84 million) into other sectors. And once again, the budget for Australia's premier research and development organisation, CSIRO, is down by 4%.

On the plus side, spending on business research, development and commercialisation has increased by 4%. Not large, but it is a win. However all this has come at the expense of programs to inspire Australians to study science and engineering.

Overall, it's fair to say industry programs have been savaged with programs to support business investment and improving business capability falling by 15%.