Why ‘baby talk’ is good for your baby 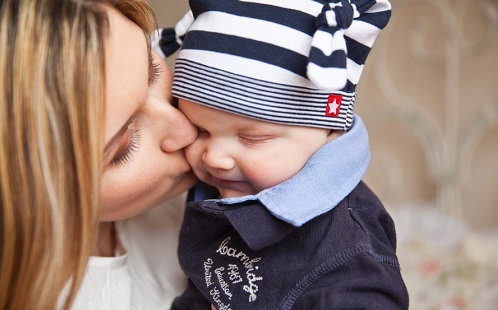 The following opinion piece by Professor Denis Burnham, from the MARCS Institute was first published on The Conversation.

People often tell new parents to avoid sing-song "baby talk" with their new addition to the family because it will slow the child's language development.

But evidence shows it does the opposite; baby talk plays an important role in development and babies prefer it to other types of speech.

Scientists used to call baby talk "motherese". Now it's referred to as infant-directed speech because not only mothers, but fathers, strangers and even three-year-old children use it when talking to a baby. Just about everyone uses it, even if they're trying not to.

What is baby talk?

Baby talk has shorter sentences, simpler words and more repetition. But it's not only baby words like "tummy" that make it attractive to babies. Much more important, especially in the first 18 months or so, are the sounds of baby talk. Baby talk has a characteristic structure, rhythm and use of emotion.

Recollect John Travolta reading the stockmarket listings in a sing-song voice to baby Mikey in Look Who's Talking. It wasn't the words that made baby Mikey happy, but the sounds and intonation.

Compared with adult-directed speech, infant-directed speech has more emotion, irrespective of the actual words used. It has a higher pitch and more up-and-down patterns, which attract infants' attention. It also has more hyperarticulated vowels and consonants, which exaggerate the differences between sounds.

What about other cutesy-wutsey speech?

Baby talk differs from other cutesy-wutsey speech, such as that directed to pets. We increase emotion and raise the pitch of our voice when talking to dogs and cats. But while this makes it sound cutesy-wutsey, research shows we don't exaggerate the vowels as we do in infant-directed speech. This is perhaps because most animals can't learn human speech (parrots being one exception).

We also exaggerate vowels to computer talking heads, but we don't raise the pitch.

And when talking to foreigners, we exaggerate vowels but show more negative emotion.

So we adjust the ingredients of our speech (pitch, emotion, vowel exaggeration) to suit the needs of the audience.

How old is too old for baby talk?

We adjust the ingredients mix within baby talk over infants' first year to match their developmental level. We continue to do so as children become older and their language knowledge becomes more advanced.

The developmental adjustments mothers make follow infants' speech preferences across ages: more emotional at three months, approving at six months, and directive ("yes, look at the doggie") at nine months. How mothers talk to their baby is automatically in synch with their baby's preferences.

So don't worry about knowing when to stop using baby talk – your child's behaviour will guide you. This is not because parents are following some child development manual; mother and infant have a highly developed conversational dance, and under normal circumstances each responds to the nuances of the other's speech.

Is all baby talk the same?

Baby talk can differ from the norm under certain circumstances. Baby talk by postnatally depressed mothers, for instance, tends to have less exaggerated pitch intonation.

And baby talk to hearing-impaired infants does not contain exaggerated vowels.

Is baby talk the same in all languages?

Some form of baby talk seems to be used across all languages, though it has only been studied in only a few of the world's 7,000 languages. Nevertheless, we know baby talk differs as a product of linguistic and cultural factors.

Quiché Mayan baby talk, for instance, does not have heightened pitch because high pitch is reserved for people of higher status.

Cantonese baby talk has no vowel exaggeration but it does have exaggerated tones. These pitch differences signify meaning changes Cantonese and many other Asian, African and Central American languages.

Japanese baby talk appears to have no vowel exaggeration but when talking to babies Japanese speakers make adjustments that emphasise the unique rhythm of Japanese speech.

Caretakers and infants work as a team to provide an optimal developmental context. In English, this entails baby talk with a mix of pitch, emotion and sound exaggeration optimal for each infant. Other ingredients are most certainly involved, at least in other languages.

Irrespective of the ingredients or language, participation in the parent-infant dance results in baby talk. When each party attends, observes, listens, the dance is smooth. When one party doesn't or can't act on feedback from the other, toes get stepped on.