In the lead up to the A League Grand Final this weekend, Western Sydney University has presented the Western Sydney Wanderers with a flag signed by students from across the region.

The Wanderers will play Adelaide United in the grand final this Sunday following their heart stopping 5 – 4 victory over Brisbane Roar in last weekend's semi final.

At a fan day at Parramatta Town Hall, Western Sydney University presented the players with a University flag bearing personal messages of support from students from across six campuses. 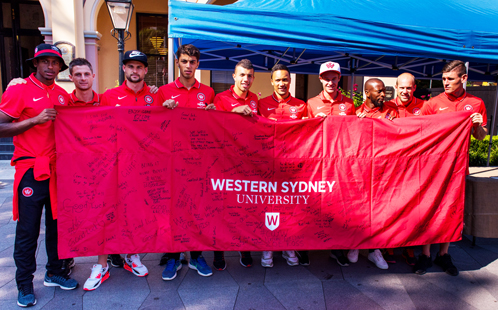 Midfielder Shannon Cole is the Western Sydney University sponsored player, and he has thanked the University for its backing.

"The support we've received from the university is fantastic, and it's great to see two important institutions in the region coming together for each other," he says.

"The community support is a big part of this football club, and it's great to see everyone here today smiling and happy to be a part of grand final week."

Under the arrangement, the University and Wanderers work together on a range of community programs.

These include Future For All, which provides students with the opportunity to learn about higher education and career planning, and Reading with a Wanderer, a literacy program encouraging students to read and write.