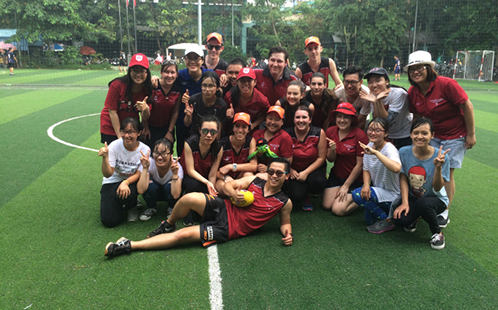 Western Sydney University's Dr Tim Hall led a group of 15 Sports Management students on a study tour to Vietnam during November – December 2015, where they helped introduce AFL to the locals.

Dr Hall said the trip, which has run every year since 2011, is a great chance for students to sharpen their skills in a more global setting.

"The key outcome of the trip is to make students aware that their industries are global and to gain an insight into what it means to be a global citizen," he said.

The students first underwent an AFL training session at Blacktown International Sports Park which was facilitated by Sport Management student David Gitz who works for AFL NSW/ACT and also participated in the 2014 study tour to Vietnam.

The session was recorded by a GoPro and drone with that footage shown in the video below.

The University's students visited the University of Economics and the Danang University of Physical Education and Sport to run locals through a series of basic AFL drills, using equipment supplies by AFL NSW/ACT.

At the end of the sessions the AFL balls were donated to the host organisations.

AFL though isn't the only thing students engaged with on the trip.

Meetings with business expatriates and senior managers of hospitality and sport organisations were used to ensure students learn about the local culture and customs of Vietnam.

"The meetings gave students a valuable insight into what it means to be a global citizen," Dr Hall said.

Dr Hall also updated a regular blog whilst on the trip which can be viewed here.