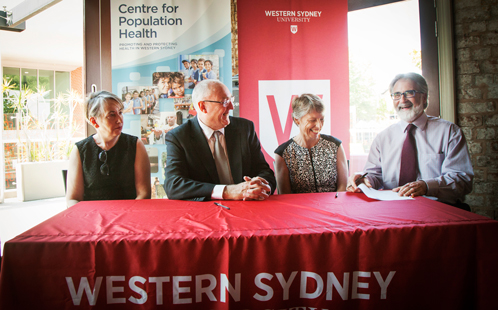 Western Sydney University has reaffirmed its commitment to the mental health and wellbeing of staff and students by extending its landmark partnership with the Population Health Services of three Local Health Districts (NSW Health).

Established in 2012, the partnership was the first of its kind for an Australian university, and delivered programs including NSW's First Smoke Free Campus Initiative.

It also facilitated the first university communication strategy for the NSW Get Healthy Information and Coaching Service, which has since been commended by the Ministry of Health.

To ensure the partnership continues to flourish, a second Memorandum of Understanding (MoU) has been signed by the University and the Population Health Services of the Nepean Blue Mountains, Western Sydney and South Western Sydney Local Health Districts. Vice-Chancellor Professor Barney Glover says the partnership confirms the University's deep commitment to the welfare of staff and students.

"As one of Western Sydney's biggest employers and tertiary education providers, Western Sydney University is proud to be at the forefront of providing a campus experience that values and promotes health and wellbeing," says Professor Glover.

"This partnership will help the University provide an environment that encourages our staff and students to lead healthier lifestyles."

The Chief Executive of the Western Sydney Local Health District, Danny O'Connor, says the partnership is a valuable opportunity for local health providers.

"Many Western Sydney residents are from culturally and linguistically diverse backgrounds, which presents unique challenges and opportunities in tailoring and promoting proactive health initiatives," he says.

"This partnership is a great way to reach large numbers of people living, working and studying in western Sydney."