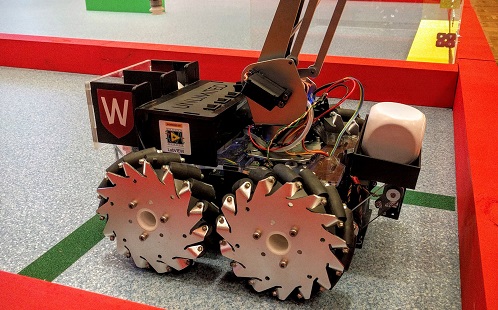 In a world of driverless cars and artificial intelligence, the next generation of robotic engineers gathered at the 2016 NI Autonomous Robotics Competition, with Western Sydney University students taking out the award for Best Robot Design.

This year's "Hospital of the Future" design theme saw teams build a robot capable of navigating a simulated hospital ward in the quickest time possible.

"I was very shocked and surprised, I thought we were done for the day and was sitting up in the grandstand when they said we had won the award," says Alex.

"It's my first robotics competition and it was a fantastic experience. All the teams were willing to help each other and it was a lot of fun."

"The students did very well together, completing their robot well ahead of time," says Associate Professor Fang.

"Their win was a surprise initially but ultimately well deserved. Throughout the competition many of the other teams saw Unlimited as the team to beat."

Coming to the end of his Computer Science degree, Alex says he believes the University has prepared him well for life after university.

"The University has done a good job in giving us the facilities to explore our talents. I think they've given us a great platform to launch careers after our degree."

The NI Autonomous Robotics Competition is an annual event and has been run since 2011, growing to 22 teams with Western Sydney University involved from 2013.