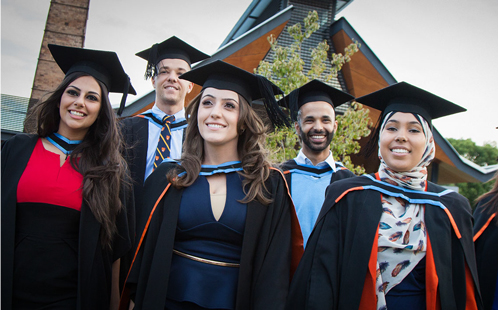 The following article is an edited extract taken from a speech by Vice-Chancellor Professor Barney Glover at the Futureproof 2016 conference in Sydney on 16 May, around the essential role of universities in shaping the Australian economy. It was first published on The Conversation website.

We are in a very different place than we were three years ago.

During the 2013 election campaign, I think it is fair to say that neither side of politics made higher education, nor for that matter research, a particularly prominent issue. Each of them went to that poll with relatively modest detail in their policy platforms.

And yet, during the last parliamentary term, we witnessed perhaps the greatest divergence for quite some time in the views of the two major parties on their policy objectives for higher education.

However, cuts of $2.5 billion remain in the budget papers from 2018 onwards.

Labor, meanwhile, is heading to this election with the most detailed higher education policy framework produced by an opposition in quite a while.

Despite the detail, there are still elements of their position that warrant discussion.

The sector well remembers that Labor in government also made sizeable cuts. Their current policy, however, pledges an increase on current funding levels.

Whatever the election outcome, Universities Australia will test proposed shifts from current policy settings against the major policy statement we launched late last year - Keep It Clever (opens in a new window).

It called for sustainable and sustained public investment in universities, measures to lift industry-research collaboration, and policies that will enable us to help Australia meet the workforce needs of the future.

It is on the theme of economic transition where the views of both major parties converge; an idea that has dominated the political landscape in recent times.

What does economic transition require?

Let's think about the challenge of how we move from an economy heavily reliant on mining and construction to one in which skills and knowledge become our most precious commodities.

That task simply cannot be achieved without a strong university sector; one that produces a highly skilled workforce and generates new jobs and new industries to replace the ones that are disappearing.

And yet, how clearly does the Australian public see that direct connection between universities and prosperity? In people's busy lives, they don't always join those dots.

We want to remind all Australians - and all candidates and political parties - of the enormous contribution that universities make to almost every aspect of Australia's economic and social wellbeing.

Many Australians would know that Australia's university researchers and graduates were responsible for inventions (opens in a new window) such as the Cochlear implant, and that they contributed to the development of Wifi at CSIRO, the realisation of the ground-breaking cervical cancer vaccine, Gardasil and many others.

But what may not be so top of mind is how a high-quality university system touches their lives in so many other ways.

The highly-skilled teachers in their child's primary school classroom? Educated at a university. The doctor who treats their elderly parent? Educated at a university. The engineer who designed the bridge they drive over safely every day. The forensic scientist who helps solve crimes and makes their communities safer. The IT programmers who engineered the technology in their smartphone.

The people who designed banking security systems to keep their money safe. The people who came up with GPS, who keep planes in the sky, and the plant scientists who are developing more drought-resistant crops. All university educated.

University graduates are vital to creating new jobs, new technologies, and new industries. Many of them also save lives, lift wellbeing, and enrich our community. A strong university sector creates benefits for all Australians.

40% of jobs predicted to disappear in ten years' time

According to last year's, New Work Order report (opens in a new window), "70% of young Australians currently enter the workforce in jobs that will be radically affected by automation".

Over the next ten to 15 years alone, the report estimates that 40% of existing jobs will disappear.

For people entering the workforce now, the notion of a linear career narrative or even steady progression is over.

Young people are expected to have an average of 17 different occupations over the course of their working lives.

Universities will be even more essential to help people reskill, upskill and reinvent their jobs.

Disruption is not a distant rumble. It is upon us.

Although no one can be completely future proofed from the negative aspects of unforeseen and seismic change, Australia's universities provide our students with the critical thinking, problem solving skills, knowledge and adaptability to help them, not only cope with such change, but lead and excel.

And it is not only our graduates who benefit.

Modelling (opens in a new window) by economic consultants Cadence Economics highlights the role of universities in increasing the number of jobs and lifting the wages and living standards of Australians and the Australian economy overall.

It shows that for every 1,000 university graduates who enter the Australian workforce, 120 new jobs are created for people without university degrees.

The analysis also finds that having more graduates in the economy lifts the wages of workers who do not have degrees, by $655 a year or $12.60 a week.

We've seen in the government's implementation of several of the major recommendations of the Watt Review that policy evolution is possible.

Changes to block grants and the infusion of the National Innovation and Science Agenda with structures to facilitate deeper collaboration with industry are further indications of the possibilities of progressive reform, if targeted at the right areas, and if properly resourced.

In contrast, other reforms and adjustments rationalised as "savings" in the context of the budget are impossible to accept, namely the $2.5 billion in cuts.

The cut of $152 million from the Higher Education Participation and Partnerships (HEPP) programme was also disappointing for an initiative that is so critical in improving access to higher education for people from disadvantaged and marginalised backgrounds.

As was the abolition of the Office for Learning and Teaching (opens in a new window), a program that drove innovation and excellence in teaching, which is vital to student retention and satisfaction.

Fortunately, the budget also included some positive announcements for higher education; such as the reversal of the efficiency dividend, originally applied in 2014, on programs where legislation has not been passed.

The allocation of $10 million for the Tertiary Education Quality and Standards Agency (TEQSA) and $8 million to improve the Quality Indicators for Learning and Teaching (QILT) website were welcome additions.

Australia's universities rate relatively highly by international standards but that standing is not to be taken for granted; particularly not when competitor nations are investing at a far greater scale and rate than we are in this critically important economic driver.

The full speech can be read here (opens in a new window).