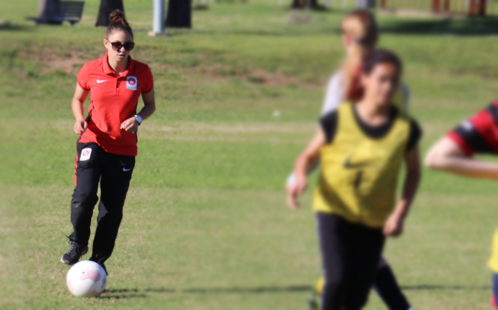 Soccer fans flocked to Western Sydney University to celebrate the official launch of the Western Sydney Wanderers W-League 2016/17 season at the team's new training base at the Penrith campus.

To celebrate the launch of the season, the team hosted a Women's Training Clinic, where soccer lovers from the region gathered to learn some tips and tricks from the players.

The Provost of the Penrith Campus, Professor Kevin Dunn, says the University and the Club are working together to further develop the partnership.

"These elite sportswomen and the support staff will make use of our oval, gym, classrooms and synthetic courts," he says.

"But there's also research and teaching opportunities, with the chance for sports students to access an elite team of athletes for data purposes."

Under the partnership, the Read with a Wanderer literacy program was launched to bring together schools, teachers and young people to improve literacy levels across the region.

In addition, the Future for All project gives young students from underprivileged areas the opportunity to plan potential careers and dispel myths about higher education. Professor Dunn says the partnership is also making a difference in other ways.

"The University has given anti-racism training to community clinic coaches, and in turn the Wanderers have supported and promoted our anti-racism app to the wider community," he says.

"On behalf of the University, I officially welcome the W-League players and support staff to Western Sydney University, and I hope our facilities help them flourish during the 2016/17 season."