Universities unite in support of diversity and inclusion 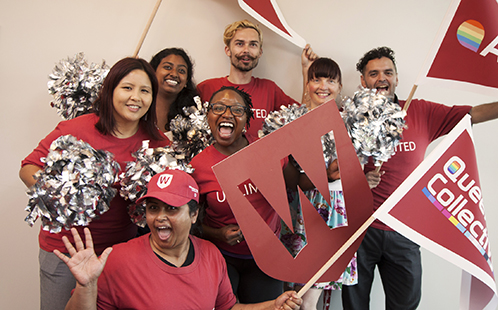 As the world unites in grief following the Orlando shooting, academics and professional staff from Australia and New Zealand universities will gather at Western Sydney University to prepare the ground for a new national strategy to drive acceptance of the LGBTIQ community on campuses.

The Australian Ally Conference, being held at the Western Sydney University's Parramatta campus from 27 to 28 June will review the current state of Ally Networks, which provide support for staff and students who identify as lesbian, gay, bisexual, transgender, intersex or queer.

The Conference will also offer workshops and training to Ally members, trainers and educators, and will allow participants and corporate partners to share their experiences and network with colleagues.

The conference convenor, Dr Sev Ozdowski, Director of Equity and Diversity at Western Sydney University and a former Australian Human Rights Commissioner, says universities have an obligation to create a culture of tolerance and acceptance among young people and the wider student body.

"Ally networks are crucial in creating a safe and inclusive organisational environment for LGBTIQ staff and students," says Dr Ozdowski.

"This conference is the first of its kind in Australasia, and will drive the development of a new national strategy to unite the Ally Networks, with plans for annual conferences to create a continuing dialogue."

The Vice-Chancellor of Western Sydney University, Professor Barney Glover, says it is crucial for the tertiary sector to unite to promote a safe and inclusive campus experience.

"The LGBTIQ community experiences a disproportionate level of assault and harassment, and it is vital for universities to work together to maximise awareness and ensure that support arrangements are accessible," says Professor Glover.

"By spearheading new national initiatives such as these, universities can sustain an ongoing dialogue and provide leadership in developing a wider culture of tolerance and inclusion."