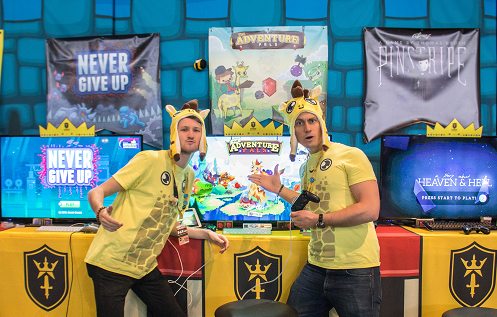 Julian Wilton isn't your average design student. At 22 years old the Bachelor of Design student at Western Sydney University is ready to take on the gaming world as part of game company Massive Monster.

The graphic designer is one half of the fledgling company, which is looking to make a big splash in the market through their multi-console game "The Adventure Pals".

The game is an adventure quest role-player that will support local co-op play across 125 levels in five different areas filled with towns, mini-games and more.

And in a hugely encouraging development, Apple, Steam and Microsoft have all signed to distribute the upcoming game for PC, Mac and X-box gamers, with the team also hoping to sign with Sony to reach the PlayStation console.

Originally a game programmer, Wilton says he moved into the design side of development to take advantage of his natural talents for graphics and design.

"I started programming in year 10 but I wasn't exactly the best at it. I gave graphic design a shot and found out I was a lot better at that.

"I've made 16 games so far, all on desktop at the moment. This game will be the first to be available on console," says Wilton.

In the fourth year of his degree, Wilton says the University greatly helped in the development of this game.

"Through Western Sydney my approach to design has become much more professional with a strong emphasis on concept which is something I struggled with before.

"If it wasn't for Western Sydney University the game may not have been developed as we started development when I did a student exchange over to the UK due to a University scholarship," says Wilton.

While Massive Monster is mainly a two-person operation, with Wilton working alongside friend and developer Jay Armstrong, the pair does get others involved in the development side of the game.

"Primarily there are two of us working on it but we do get some friends involved to help us test the game."

The game is now set for release onto desktop and consoles; however Massive Monster is still in need of support. View their Kickstarter here.