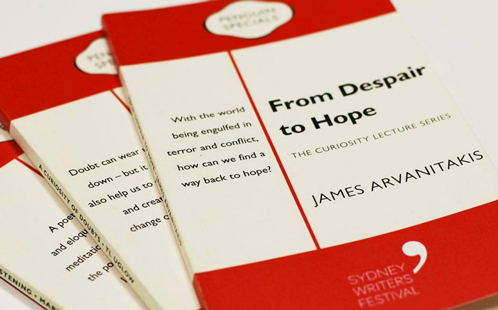 Ideas will be flowing at Western Sydney University and the wider Western Sydney region throughout May, with the return of one of the world's biggest literary events – The Sydney Writers Festival.

During the festival, the Dean of the University's Graduate Research School and former Prime Minister's Teacher of the Year, Professor James Arvanitakis, will launch his landmark book published by Penguin as part of the Curiosity Lecture Series.

From Despair to Hope is an uplifting examination of the way people can respond to violence and terrorism through acts of genorosity.

Professor Arvanitakis says he wrote the book in the aftermath of the Paris terrorist attacks.

"Modern society is based on trust. Everyday we rely on other people, from the mechanics who service our cars, to the engineers who design our buildings, to the strangers who sit next to us on the bus," he says.

"When terrorism undermines that trust, we feel a sense of dread, and our trust in other people is tested. But rather than respond by building more walls, or starting new wars, we need to work to create hope in our society, and trust towards strangers."

"From Despair to Hope shows the possibilities of hope by examining the lives of two remarkable Australians - former Sudanese child soldier and refugee lawyer, Deng Adut, and Jen Armstrong, who has emerged from a violent relationship to create a new charity for women in need."

At a separate festival event, prize-winning Chinese author Ye Xin will discuss his latest book Educated Youth, translated by Dr Jing Han from the School of Humanities and Communication Arts and published by Giramondo.

Like thousands of other graduates, Ye Xin was sent to work the country as a zhiqing (educated youth). When zhiqing were allowed to return to their family homes in the 1970s, many left their spouses and children behind.

Ye Xin's latest novel tells story of five children of zhiqing who travel across China in search of their birth parents.

The translation and publication of this novel in English has been made possible by the generosity of Mr William Chiu, through a philanthropic gift to the Western Sydney University Foundation Trust.

As part of the festival, the University is also hosting a free event on Wednesday May 18 for budding writers keen to see their works published.

Getting Published: Words to the Wise features an expert panel of authors and industry professionals to help the audience demystify the opaque world of book publishing.

The authors will provide tips on how to increase the chances of getting noticed, and share their stories of how they secured a publishing contract and lived to tell the tale.

In other events, Professor James Arvanitakis will be In Conversation with the founder of the Australian Greens, former Senator Bob Brown about his autobiography Optimism.

The Director of the Whitlam Institute Eric Sidoti will MC a discussion with journalist and former '7.30' presenter Kerry O'Brien, about his book Keating.

Professor Arvanitakis will also be facilitating a discussion with retired Major-General John Cantwell about his new book Exit Wounds, which applies the lessons he learned on the frontline of battle to everyday life.