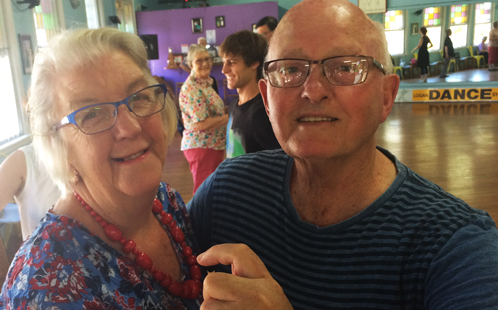 A world first study has found people over the age of 40 who participate in dancing almost halve their risk of dying from cardiovascular disease.

Researchers from Western Sydney University and the University of Sydney studied 48 thousand people without cardiovascular disease over a decade to determine how exercise affected their health outcomes.

The study, published in the American Journal of Preventive Medicine, is the first to track the impact of dance on mortality from heart disease. It found those who participated in dancing had 46% lower risk of cardiovascular death over a decade compared to those who rarely or never danced.

These outcomes were achieved by people who were at least slightly out of breath or sweaty while dancing, but not for those whose dancing was at a light intensity.

"The Bee Gees said it best- you should be dancing," says lead author Associate Professor Dafna Merom, from the Western Sydney University School of Science and Health.

"Our study shows that dancing is one of the best ways to protect from cardiovascular disease death."

"For example, the study found that, compared to fast walking, dancing further reduced the risk of dying from cardiovascular disease by 21%."

"We should not underestimate the playful social interaction aspects of dancing which, when coupled with some more intense movement, can be a very powerful stress relief and heart health promoting pastime," he says.

Associate Professor Merom said the health benefits could be due to the very physical nature of dance.

"Some styles of ballroom or folk dancing almost mimic the short bouts of vigorous intensity we see in interval training, and that we know has proven heart health benefits, so it is like exercise in disguise," said Associate Professor Merom.

"Furthermore dancers are often dancers for life, so we don't see the drop in and out as much as we do in regular exercise classes."