Dr Benjamin Jones from the School of Humanities and Communication Arts is undertaking a survey to investigate Australian attitudes to the national flag, and how they would feel if it was changed.

The Alternative Australian Flag Survey (opens in a new window) has been designed by Dr Jones as part of a larger Australian Research Council funded project looking at Australian national symbols. Partly inspired by the recent two-stage flag referendum in New Zealand, this survey asks participants to choose their favourite flag from six popular alternative designs. The research will shed light on opinions and attitudes towards a new flag, and offer broader commentary on the changing representation of Australianness.

"The New Zealand flag referendum (opens in a new window) has taken a sensible approach worth adopting," says Dr Jones.

"A flag panel was set up to select four credible flags. After a groundswell of support for a fifth design, it was added to the group. The preliminary referendum ran from 20 November – 11 December 2015. The winning design, the Silver Fern with black and blue background, will be pitted against the current New Zealand flag in a second referendum in March 2016."

"In the same spirit, here are six credible alternatives to the current Australian flag. Even if you would prefer to keep the current flag, you are encouraged to express your opinion on these designs. There is some information below on each of the designs or you can go straight to the survey (opens in a new window). Voting will remain open until 26 January 2016." The Eureka Flag is an iconic Australian symbol associated with the Diggers who fought at the Eureka Stockade. The advantage of this flag is that it has a revolutionary history going back to 1854. It is the first flag to be called 'the Australian Flag' and it was flown as an act of rebellion against unjust mining taxes. The original flag is kept at the Museum of Australian Democracy in Ballarat.

A possible disadvantage is that the flag has been appropriated by many groups; unions, communists, white nationalists, and most recently, the Reclaim Australia movement. Some may say it has too much ideological baggage but it is certainly an powerful flag with an indisputable place in Australian history. The Southern Horizon flag was designed by Brett Moxey and offers a simple but instantly recognisable design. It maintains the Federation Star and the Southern Cross — the two most popular elements of the Blue Ensign. The national colours of green and gold are represented in a wave. This not only makes the flag unique but also represents the hills and plains and Australia's beaches. Significantly, the Federation Star is in the top left signifying that the people and our democratic system, not the British, are the ultimate source of power in this nation. The Reconciliation Flag was designed by ANU academic Dr John Blaxland. The flag is deliberately complex. The argument here is that a new flag should be embedded with meaning. It should be unique and show the world who we are as a people. The traditional Aboriginal colours of red, yellow and black acknowledge our first peoples. The seven point star represents Federation. It is comprised of 250 small yellow dots, representing the distinct indigenous cultures that occupied this land. The red, white and blue indicate our British institutions. The Southern Cross is green and gold, like the Wattle. 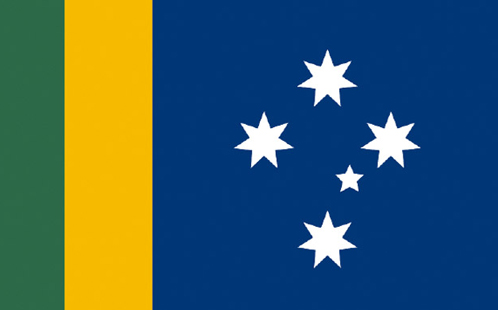 Ausflag, an independent lobby group for a new national flag, designed a Sporting Flag in 2013. The immediate aim was to give Australian sports fans a patriotic flag to wave, especially during the Ashes and other competitions against England or Great Britain. The flag is another credible alternative to the national flag. The strength of this design is its simplicity, something schoolchildren could draw. It is apolitical with no ideological baggage of the left or right. It represents multicultural Australia, rather than privileging British heritage. The Golden Wattle is Australia's official floral emblem and Wattle Day is celebrated on 1 September every year. Terry Fewtrell supports the Golden Wattle flag, arguing that the wattle links us to the earliest human occupation of this continent. Indigenous Australians have used wattle for thousands of years as a season marker, as a source of food and the raw material for hunting and sound instruments. The wattle emblem is made up of smaller spherical flowers. Each flower is arranged in a circle to create the Commonwealth Star in the centre. The individual flowers arranged as one, suggest the idea of diversity, and the unity of our nation. 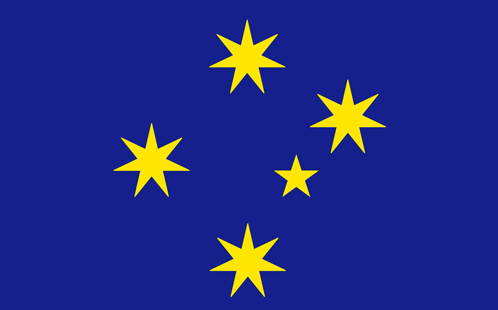 The 1991 Ausflag competition winner was a simple blue flag with a white southern cross. Academic, Russell Kennedy has modified the Southern Cross design to include yellow stars, linking it to the Aboriginal flag. The blue is retained as a link to the current Australian flag and Torres Strait Island flag. Blue and yellow were also the original colours of the Australian coat of arms. This flag has a strong, recognisable and symmetrical design which can be supported by a genuine unifying claim that people have lived under the Southern Cross in Australia for between 40,000 and 70,000 years.

Dr Benjamin T. Jones is an Adjunct Research Fellow in the School of Humanities and Communication Arts at Western Sydney University. He is the author of three books and several journal articles. He is an Australian Research Council grant recipient working on a project that explores Australian national symbols.