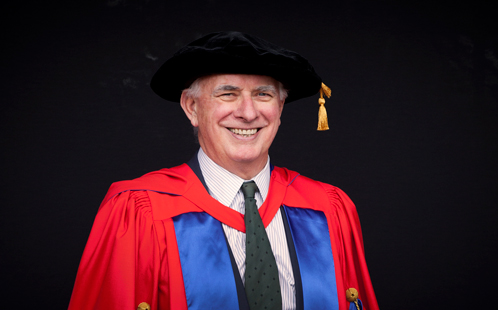 Western Sydney University has awarded Dr Nicholas Whitlam an Honorary Doctorate of Letters in recognition of his distinguished service to business and the broader community.

Dr Whitlam received the honour at the University's April Graduations, where he also delivered an address to graduating students.

He says it's a thrill to receive the honorary award.

"Western Sydney University is a true representation of modern day Australia, and I'm excited to receive this honour," he says.

"The University students here today are a great representation of Australian multiculturalism, and there are a lot of students who are the first graduates in their family."

"There isn't a mother, a father, a brother or a sister who wouldn't want to be here today."

Dr Whitlam was CEO of the State Bank of NSW before establishing investment bank Whitlam Turnbull and Co.

He was also President of the NRMA and Chair of NRMA Insurance, and Inaugural Chair of the Whitlam Institute within Western Sydney University, which was established to honour the work of former Prime Minister Gough Whitlam.

Upon receiving the award, Dr Whitlam reflected upon his time as the Inaugural Chair of the Whitlam Institute during its formative years.

"My father was punctilious with keeping records, and was very deliberate in his decision to give his papers to the University, as it was part of the world he represented as a member of parliament," he says.

"A generation ago there was no University in the region, and to stand here today and see how far both the University and the Whitlam Institute have come makes me very proud."