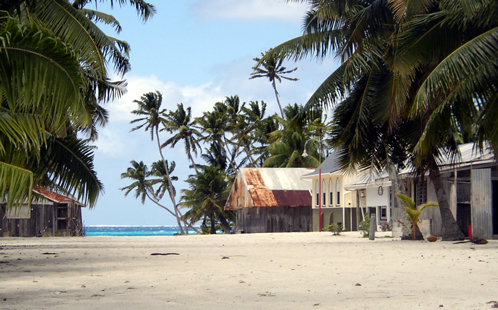 A book by a Western Sydney University linguist has shed new light on the unique society and English language that has evolved in the Cook Islands among the descendants of a real-life Robinson Crusoe figure.

In the early 1860s, Englishman William Marsters and his three Polynesian wives settled the deserted Palmerston Island, intending to create a new utopian society for their descendants. Just over 50 of these descendants currently live on the tiny one square kilometre island in a highly regimented culture centered on family obligations and social responsibilities.

Nearly everyone has a designated job, from Immigration Officer to School Teacher, with their lineage determining the part of the Island they occupy- Sunrise, Middle, and Sunset.

Dr Rachel Hendery, from the Western Sydney University Digital Humanities Group, was granted extensive access to the Island and its inhabitants as part of an Australian Council Research Discovery project, which has culminated in her just-published book 'One Man is an Island'.

Dr Hendery says the island's isolation provides a natural social experiment: a unique opportunity to observe how a small group of people have created a new dialect and society free of the globalizing forces that have shaped the past 150 years of modern civilisation.

"As Palmerston Island is at least three days boat voyage from the nearest population centre, the local society provides an unparalleled example of how human civilization can evolve in isolation," says Dr Hendery.

"Most striking is the Englishness of the inhabitants. They fly the Union Jack and speak their own form of English, with the dialect retaining many features of William Marsters' 19th century speech patterns."

"Their words and grammar patterns often resemble the mistakes made by many first generation migrants learning English, but in this dialect these are not mistakes, but rather the 'correct' way of speaking. Locals use many Pacific words, yet the overall speech retains a strong Midlands (English) accent." During her research for 'One Man is an Island', Dr Hendery spent several months on the island, and has since worked with expats living on Rarotonga, the most populous of the Cook Islands.

"I was quite fortunate to be given such an insight into life on the Island, which is largely ignored by the outside world," she says. "Private yachts dock a few times a year, but are only allowed to visit during daylight hours. The island has a few computers and a satellite phone, but these are rarely used, meaning locals are essentially disconnected from the digital world."

As part of her research, Dr Hendery combed through archives in the Cook Islands and London to investigate the history of the language, as documented in letters, telegrams and records from the island.

"Legend tells us William forbade his 30 children from speaking the Maori languages of their mothers, but this is actually the opposite of what the archival materials show," she says. "Interestingly, the local dialect contains intriguing similarities to many creole languages from around the world, even though its history is obviously different from most creoles."