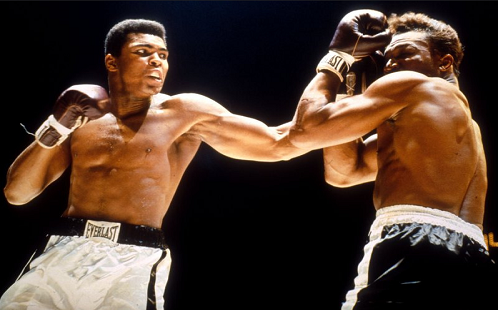 The descriptor "icon" is vastly overused in these celebrity-fixated times, but it could have been invented for Muhammad Ali, who has died aged 74. Thirty-five years after he threw his last punch in the ring, Ali is still front of mind in any discussion of the most-important sportsman ever.

He does not occupy this status because he is widely regarded as the best boxer there has ever been, who narcissistically called himself "The Greatest", and then forced a reluctant boxing world to agree. Ali was much bigger than boxing. He came, from the late 1960s onwards, to symbolise resistance to racism, militarism and inequality.

He embodied the intimate relationship between sport and politics that so troubles those, like nationalistic politicians, who deny its existence while ruthlessly exploiting it.

So how did Ali so consistently receive the kind of acclaim heaped on him by human rights activist and sports scholar Richard E. Lapchick, who describes Ali as "not a one-in-a million figure, but a once-in-a-lifetime person"?

Ali was a superlative boxer, but it was his great physical beauty and quick wit that made a major impression on those who knew little of boxing or were repelled by its brutality. Under his birth name, Cassius Clay, he forced himself into public consciousness by theatrically talking up his "prettiness", athletic brilliance and verbal facility.

From early in his career he self-consciously played the role of anti-hero with a racial twist. Knowing the white-dominated boxing establishment and fan base were always searching, especially in the prestigious heavyweight division, for a "great white hope" to put African-American champions in their place, Ali goaded them to find him another fighter to beat.

Decades before sportspeople used social media to communicate directly with the world and polish their image, Ali bent the media of the day to his will through outrageous publicity stunts, quirky poems and memorable catchphrases. Another white-dominated institution, the mainstream media, had to deal with an unprecedented, freewheeling assault on its familiar control routines by a black athlete who refused to be deferent and grateful.

This boxing-related pantomime was entertaining. But it was when the brand new world heavyweight champion rejected his "slave name" in 1964, became Muhammad Ali and declared his allegiance to the black separatist Nation of Islam that he became a major political presence in popular culture.

His subsequent refusal – on religious and ethical grounds – to be conscripted to the US armed forces and to fight in the Vietnam War turned him into both a figure of hate and a symbol of hope in a bitterly divided America. The world beyond boxing and America now had even more reason to pay close attention to Muhammad Ali.

Once more, Ali was ahead of the game. Anticipating the deep political divisions over the two Gulf Wars and their disastrous outcomes, here was a vibrant celebrity around whom dissenters could rally.

Banned from boxing for three years because of his political stance, Ali acquired the status of a martyr to his convictions. He stood conspicuous among fellow sport stars who kept their heads down on matters of politics – whatever their private views.

In retrospect, it is remarkable that he was not assassinated like the Kennedys, Martin Luther King Jr, and Malcolm X.

When he returned to the ring, Ali became the focus of spectacular media-sport events like "The Rumble in the Jungle" and "The Thrilla in Manila". These boxing matches helped write the rule book of 21st-century "sportainment".

Ali's boxing career petered out, yet he remained an instantly recognisable global celebrity. But by 1984 the savage toll that boxing took on his body, especially his brain, became evident. It is believed to have exacerbated the Parkinson's disease that progressively debilitated him.

Some of the most touching and heart-breaking moments in sport came when his shaking body performed ceremonial duties at the 1996 Atlanta and 2012 London Olympics. When Ali spoke in public, his rapid-fire repartee was reduced to a low, slow whisper.

Despite his failing health, Ali relentlessly pursued his humanistic activities. He supported charities and foundations such as Athletes for Hope, UNICEF, and his own Muhammad Ali Center.

Ali was no saint. His cruel mocking of rival Joe Frazier, which he later regretted, saw him treat a fellow African American as a "dumb", "ugly", racially complicit Uncle Tom in a manner that resonated with some of the worst racist stereotypes. His complicated history of intimate relationships with women and his many offspring is of soap-opera proportions.

But, in touching and enhancing the lives of so many people across the globe, here was a man much more sinned against than sinning.

Ali's passing comes at a time of increasing concern about sport-induced traumatic brain injury. The near-fatal outcome of a recent bout in the UK between Nick Blackwell and Chris Eubank Jr has once again put boxing in an unfavourable spotlight.

Ali paid a ferocious price for his fame. Most leading medical associations would ban the sport that brought him to prominence.

Yet, paradoxically, it is boxing that we have to thank for somehow – out of the violence and pain of its self-proclaimed "sweet science" – delivering to the world Muhammad Ali, The People's Champion.