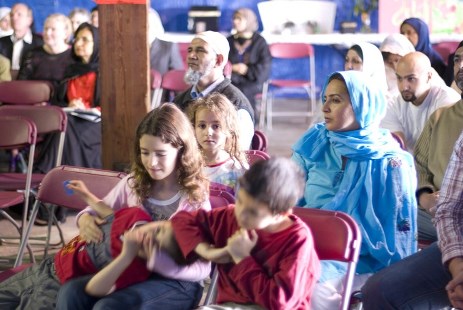 The following article, by Renu Narchal, from the School of Social Sciences and Psychology, was first published on The Conversation website.

An estimated 30% of Australians are born overseas while nearly 20% speak a language other than English (opens in a new window) at home. But our translation services grapple to meet the demand of those who don't have an adequate grasp of English, particularly recent migrants and refugees.

Research shows in these situations, children often end up interpreting – known as language brokering – for their parents. This is a heavy responsibility with psychological consequences.

Migrating to a new country has many challenges, including losing the closeness of extended family, needing to learn a new language and having to fit into a foreign society. These changes are often easier for children than adults.

Parents often end up depending on their children to translate and interpret both the new culture and language in a range of settings, including the doctor's office, legal situations (where children can help their parents fill out immigration documents), and mediating during parent-teacher interviews.

Research shows children as young as eight, who obviously don't have training in translation and become linguistic and cultural mediators, experience increased responsibility which leads to role reversal. Parents express dependent behaviours and children, in an attempt to meet their parent's needs, acquire nurturing, supportive, and care-giving behaviours.

Such relationship disturbances have been linked to aggression, risk-taking behaviours and social problems in children.

There are some benefits to children taking on increased responsibilities. Children who translate for parents acquire enhanced cognitive, social, emotional and interpersonal skills.

A survey based on 280 sixth grade (aged around 11 to 12) Latino family translators at a Chicago school found they performed significantly better on standardised tests of reading and math than their non-translating peers.

In another study, researchers interviewed 25 Latino children of around 12 years who were translating for their parents. These children said their responsibilities made them feel proud, helpful and useful.

Research also shows Latino children of around the same age, who didn't feel translation to be a burden, had no negative health outcomes.

But translating and interpreting is a complex process. Where children saw their increased responsibility as a burden, it worked as a stressor, leading to risk-taking behaviours, such as drinking alcohol and using marijuana.

Overstretched with responsibility beyond their age, children can feel obligated, with those who become translators reporting high levels of stress and pressure to translate mature matters accurately.

Children also often feel overburdened in complicated and serious situations, such as when they are required to translate documentation.

One study obtained longitudinal data from 182 first- and second-generation Chinese 15-year-olds. It found the children who more frequently acted as interpreters for their parents had poorer psychological health. Frequency of translation was also associated with parent-child conflict, particularly for those who held strong family values.

In California, a bill written in 2013 by a former Chinese immigrant who translated for his parents as a child, proposed banning the use of child interpreters younger than 15 by any state or local agency or program that receives state funding.

Now a child psychologist, the former child translator told the Los Angeles Times that not only were children likely to make mistakes in translation, the "youngsters cannot handle the stress". Although the bill wasn't successful, the process highlighted the need for better understanding and awareness of the issue.

Australia could consider a similar approach, but more research would need to be done to spell out the negative implications of language brokering.

If such a legal mechanism were implemented, we'd need enough translation services in medical, legal and other official settings to fill the gap child translators would leave behind.

An unpublished study I completed showed a number of children who acted as interpreters found their education was disrupted, while others considered leaving school due to their responsibilities.

Currently, there are no supports and services provided for children translators in Australia. Nor is there enough research on the prevalence of this experience in the country. There is an urgent need for the government, the community, and parents to better understand the potential impacts of language brokering on children's health.