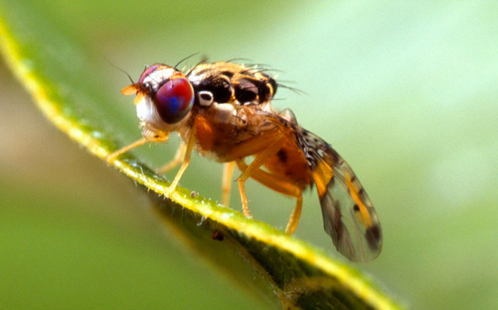 An international team has completed the genome of the invasive Mediterranean fruit fly, marking a key step towards improving current methods to control this pest insect.

In a study published in Genome Biology (opens in a new window) 64 scientists from Australia, Germany, Greece, Italy, United States, Spain and the United Nations completed and characterised the genome sequence at a quality rarely accomplished for any insect pest, giving them new insights into how genetics enable the insect to be such a successful invasive pest.

"Genes control many important traits such as the ability to reproduce, withstand pathogens, find host plants, and break down environmental toxins," says lead author Dr Alexie Papanicolaou, from the Hawkesbury Institute for the Environment at Western Sydney University.

"Half a decade of labour from such a large team has now precipitated key insights for these genes that will be critical for our ability to protect our horticultural systems."

Dr Al Handler from the United States Department of Agriculture, the agency which funded this study, says one approach currently used worldwide for over the past 50 years is the Sterile Insect Technique.

"The SIT involves mass-rearing insects in the lab, sterilizing the males and releasing them into the wild to mate with the females found in nature, resulting in eggs that don't hatch," says Dr Handler.

"SIT releases sustainably suppress, or eventually eradicate, the local targeted population, but can also be used as a preventative measure to avoid the establishment of introduced populations."

"This is critical to protect our industries from such an invasive insect.", emphasised Dr Handler, who created and coordinated the consortium.

"For example, we can begin to understand how the insects can invade and survive in diverse environments, and how they will adapt due to climate change," he says.

"We can also offer new, more cost-effective, control options and inform the industry on population movements, insecticide resistance or even how the flies might cope in putative future invasions".

"Further, we now have acquired the capability to do this for other species in less than a year: this is a breakthrough moment in building the capability to generate very high quality genome resources rapidly and accurately, a key new capability for our biosecurity."