Leadership starts with the ability to articulate a vision, but what happens next? 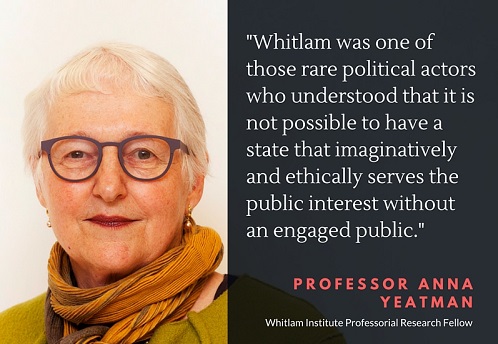 "It's never been a more exciting time to be Australian"

Bombarded with repetitious and empty slogans it's no wonder that many people simply switch off, or turn to other political candidates whose ability to 'cut through' is divorced from a cohesive and productive policy platform.

This isn't just an Australian phenomenon, with Brexit and the rise of Trump two examples of ineffective or overblown political communications which have failed to create a positive sense of commonality, something that used to be central to the political sphere.

The political leaders and the established political parties behind them are intelligent and well-resourced, so how did this destructive echo-chamber come to pass, and what is the alternative?

Professor Yeatman examines Whitlam's legendary use of language to argue that political rhetoric is of central importance for creating civil possibility. Talking about a common sense of purpose, and talking about institutions such as the parliament, political parties, the public sector and the federal system of government all contribute to making them.

"Gough Whitlam was interested not just in persuading us, but in asking us to share a vision and help build a political imagination," Professor Yeatman says.

"Whitlam was one of those rare political actors who understood that it is not possible to have a state that imaginatively and ethically serves the public interest without an engaged public."

This essay is based on a speech that was first delivered at the Whitlam Institute's forum on Gough Whitlam and the Social Democratic Imagination.

"What strikes me most about Anna Yeatman's paper is not so much what it says about Gough, but what it tells us about contemporary Australian politics," says Eric Sidoti, Director, Whitlam Institute.

"Professor Yeatman makes clear that Whitlam's vision was designed to be applied with the consent and the involvement of the public."

"It turns on its head the empty lament that people today just don't trust politicians, by pointing out that for Whitlam the key was to have trust in the people."

'The Whitlam Legacy' is a series of occasional papers published by the Whitlam Institute offering contemporary insights on matters of public interest inspired by Gough Whitlam's public life and the legacy of the Whitlam Government.

Gough Whitlam's vision of the Australian Res Publica: Creating civil possibility in rhetoric and action is available to download online.