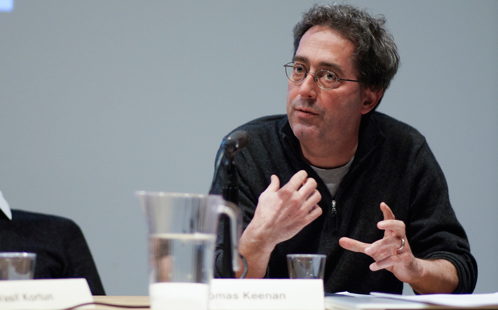 Human rights claims are routinely made across the world to establish and maintain a minimum standard of human behaviour. They are inscribed in laws and conventions, and enforced by national and international authorities. But not every claim is successful, and in many cases people lack the basic mechanisms to even report serious human rights violations.

The Director of the Human Rights Project at Bard College New York, Professor Thomas Keenan, will discuss the nature of human rights claims at the 2016 Western Sydney University Thinking Out Loud Lectures in Philosophy at the NSW State Library (opens in a new window) from April 4.

Organised in conjunction with ABC Radio National and Fordham University Press, the Thinking Out Loud lecture series brings the world's most influential philosophers to Australia to discuss important contemporary issues.

Their lectures are subsequently issued in a special book series by Fordham University Press, the most influential international publisher in the area of Continental Philosophy.

"Human rights are, above all, claims. Before and after they are inscribed in laws and conventions, protests and pamphlets, they are claims addressed by us, to us, and about us," says Associate Professor Keenan.

"This rhetorical character of rights claims offers a lever through which we can understand how they succeed or fail."

"The lectures will ground this account of human rights claims in a series of exemplary instances from the front pages and front lines of today's struggles over rights."

Thomas Keenan (Bard College) directs the Human Rights Project and helped create the first undergraduate degree program in human rights in the United States. He is the author of Fables of Responsibility (1997) and, with Eyal Weizman, Mengele's Skull (2012).

Bookings for the Thinking Out Loud series are essential, and can be made online (opens in a new window).

The Thinking Out Loud series is organised by the Philosophy Research Initiative at the Western Sydney University.