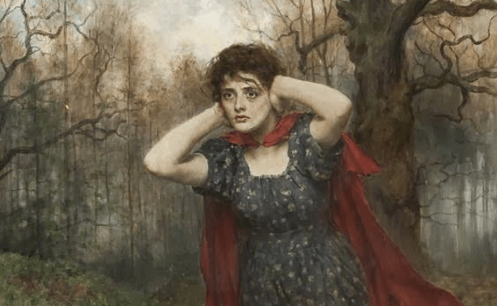 Often when the media report (opens in a new window) that a mother has abandoned her newborn baby, the community reacts with shock and disbelief. Yet, in fiction, when a woman feels so desperate and hopeless she believes abandoning her baby is her only option, we are able to show sympathy.

These stories of child abandonment in fiction have remarkable parallels to the real life experiences (opens in a new window). One example of this uncanny parallel is the case of a baby found in a stormwater drain in Western Sydney and the story of Hetty Sorrel in George Eliot's 1859 novel, Adam Bede.

In November 2014 (opens in a new window), the community was shocked when two passing cyclists heard the cries of a newborn baby coming from a stormwater drain in Sydney's western suburbs.

Despite having been dumped six days previously, the baby boy miraculously survived and was placed in state care. When the boy's mother was identified, she admitted she knew dumping her newborn in the drain was likely to lead to his death. She was charged with attempted murder.

The mother was described in the media as "intellectually impaired" when she began her first relationship at age 30. She became pregnant following a few sexual encounters but her partner left her, telling her via a text message he had met someone else.

She was afraid of telling her Samoan family she was pregnant because the father was Fijian and would not have been accepted by her family. Thus she gave birth alone in Blacktown Hospital without the support of family or friends.

She discharged herself within 24 hours of giving birth and sat in a park with her infant son before abandoning him in the drain. She returned to the drain on a couple of occasions but because she could not hear the baby crying, she assumed he was dead.

On July 21 2016, the mother was sentenced to three-and-a-half years' jail. With time already served and parole for good behaviour, she could be released as early as August 2016. It was reported the boy was in foster care and continued to meet his milestones, but he would continue to be tested for any negative effects from that period of abandonment until he went to school.

In the novel Adam Bede, the plot revolves around (opens in a new window) Hetty Sorrel, whose story has many parallels to the woman who abandoned her baby in the drain.

Hetty is a dairymaid who conceals her pregnancy because she does not want to expose her affair to the heir to the estate. The discovery of her pregnancy is a source of great shame and distress for Hetty.

Although she contemplates suicide, she decides to run away from home because she does not want her pregnancy exposed. Like the mother of the baby in the drain, Hetty gives birth alone and unsupported.

Hetty is charged with murder after abandoning her child. The description of Hetty's capture shows that, like the woman who left her baby in the drain, she returned to the place where she abandoned her baby:

"And the next morning another constable came to me to go to the spot where I found the [dead] child. And when we got there, there was the prisoner a-sitting against the bush where I found the child, and she cried out when she saw us (p.374)."

Hetty's sentence of hanging is commuted to transportation, and she does confess her crime to another character. However, her continuing mental distress is obvious when she says she still hears the baby's crying in her head:

What fiction can teach us

The fictional account of Hetty Sorrel has resounding echoes to the woman who left her baby in the drain. Yet while we can take a compassionate view of Hetty's situation, we often demonise women who abandon their babies in real life.

In fictional accounts we have the opportunity to see how community attitudes affect the woman as we hear her voice talking about her experience. But often in media reports of the abandonment of a baby, we are not given access to the woman's voice that allows us to develop empathy for her situation.

Fictional accounts of child abandonment are a way of opening a discussion around this very distressing subject so we can find solutions. They demonstrate that shaming a woman leads to silence and she cannot ask for the support she requires to care for her child. Therefore we can use fiction to explore our own feelings towards a mother who believes her only option is to abandon her child.

A recent study (opens in a new window) reported women are reluctant to disclose feelings of distress either during pregnancy or following childbirth because they believe they have failed and they fear they may lose their babies.

Making this issue worse, health care professionals often find it difficult to discuss these feelings with the mother. They tend to focus their attention on the baby instead. Rather than blaming the mother, we need to consider how the community has failed to support her.

It is important to provide compassionate and non-judgmental support to women who express feelings of not being able to cope with their babies. This could include providing safe spaces for women to develop the confidence they need to become effective parents and to negotiate any barriers they may face in their immediate future.

Rather than expressing shock and bewilderment when a baby is abandoned, we need to make sure all women know they are supported, despite any fears of not being able to care for their child. It is only with this support that women in distress can make choices that keep their babies safe.