Hidden housemates: when possums go bump in the night 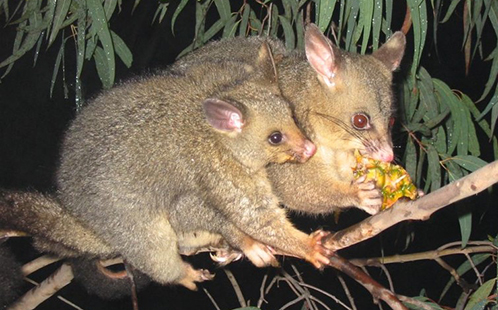 You're drifting off to sleep when, suddenly, there's a bump and a thump and an unearthly shriek. But never fear, if your home is making these noises you probably don't have ghosts, but a family of common brushtail possums.

Researchers have documented 18 different brushtail possum sounds. These include "grunting, growling, hissing, screeching, clicking and teeth-chattering calls, many of which would not be out of place on a horror movie soundtrack".

Common brushtail possums (Trichosurus vulpecula) live across much of suburban Australia. Although often associated with bushland environments and commonly considered a tree-dweller, these adaptable creatures are also highly attracted to human houses.

Despite being the same size as a domestic cat, these lively, nocturnal marsupials frequently make their dens in the ceiling and wall cavities of homes. In fact, one study of possums in urban Tasmania found that 87% of their visits to dens were associated with buildings (mostly older houses), while 45% of den visits were to roof cavities.

These hidden animals make themselves known to their human housemates as they run across the ceiling. A Sydney study found that as many as 67% of people whose properties were visited by possums heard possum activity on or in roof cavities, while 58% reported possums living in these spaces.

Possums in the city

At the time of European arrival, common brushtail possums were abundant across mainland Australia and Tasmania. However, intensive hunting for a burgeoning fur trade in the 19th and early 20th centuries led to a drastic decline in possum numbers. Since the end of hunting, habitat degradation and fragmentation, fires and fox predation have put further pressure on possum populations. In contrast, they appear to be flourishing in our cities.

Common brushtail possums are territorial creatures, usually sleeping alone during the day in dens in tree hollows, rock piles or logs. Dens are often in limited supply in the bush and possums will compete for nesting sites, sometimes fighting to the death. In contrast, suburbia provides an abundance of potential nesting spaces.

In fact, urban possums seem to prefer living in human-built structures, even when hollow trees are available. A single roof can provide a home for many cohabiting possums, although disputes among roommates may become raucous.

Another reason that brushtail possums have adapted so successfully to our cities is their generalised diet. Unlike specialised eucalypt feeders like the koala, brushtail possums eat the leaves, flowers and fruit of a range of native and exotic plants, as well as Eucalyptus leaves. They also sometimes eat insects and bird eggs.

Thus suburban gardens, with their abundance of fruit trees, roses and vegie patches, provide a "possum supermarket", conveniently offering a diverse array of tasty, nutritious foods year round – much to the frustration of many gardeners!

In a study in eucalypt woodlands in north Queensland, Jane and her colleagues showed that female possums with access to the greatest amounts of available protein within their home ranges were more likely to breed twice, rather than just once per year.

Eucalypts are generally a poor source of protein and this is likely to limit populations of possums in natural bushland. However, given the abundance of high-quality food sources and limitless den sites in urban environments, it is not surprising that common brushtail possums seem to thrive there.

A possum in the roof!

People who share their homes with possums describe hearing them walking around the roof cavity. Emma's research heard residents speak about the "thump, thump, thump" of possums walking across the ceiling. Others described being jolted awake at dawn to crashing and scraping sounds, and a feeling that someone was in the house. Some people admitted thinking their house was haunted, a feeling that was triggered by night-time noises coming from hidden spaces.

Many people enjoy living with possums, because they feel like it connects them to a time before Australia was urbanised. Some people also value personal connections with possums, becoming familiar with the individuals that share their garden – even giving them names and pointing them out to visitors.

However, people also often describe possums as a pest. They complain about the noise and damage that possums can cause. Damage to ceiling cavities, urine stains and odours in the ceiling are reported, and some people experience possums dying in the ceiling. These rotting bodies can be overwhelmingly smelly and extremely difficult to find.

It is interesting that many people both value possums and find them to be a pest. This is evidence of the complicated relationship that we have with native animals that live inside our homes. We enjoy their wildness, but are also challenged by the way that they make our homes a little bit less human and a little bit closer to nature.

Despite the fact that some people are less keen on house-sharing with possums, they are protected under the wildlife acts of most states in Australia. Although these laws vary, they generally require that residents seek a licence before trapping or moving a possum.

In New South Wales the relevant law is the National Parks and Wildlife Act 1974. If a possum is living in your ceiling, in NSW you can apply to the Office of Environment and Heritage (OEH) for a licence to trap it. Possums must be trapped humanely and released on the property where they were found within 150 m of the place where they were caught.

Note, however: possums moved outside of their home range typically die. They are also usually replaced within four weeks by another possum that moves into their territory.

The OEH suggests that people live alongside possums that share their garden, explaining that "if you encourage a possum to stay around and claim your yard as its territory, other possums will be discouraged from taking up residence". The OEH also recommends installing nest boxes in trees away from the house to discourage possums from nesting in roofs, and carrying out repairs to close up any holes after possums are removed.

Wildlife protection laws mean that common brushtail possums have a right to live in urban Australia. This means that we need to learn to live well together.