‘Grotesque spectacle’? Rio has a long way to go to become more accessible 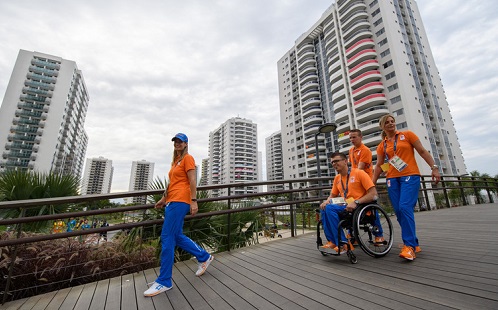 The following opinion piece, by Dr Jorge Knijnik from the School of Education, Associate Professor Tracey Dickson from University of Canberra and Simon Darcy from University of Technology Sydney was first published on The Conversation.

It was quite a reality check. With one phrase, "Espetáculo grotesco" ("grotesque spectacle"), Portuguese journalist Joaquim Vieira created a major controversy with his denigration of the Paralympic Games.

Through his choice of words, and his throwback to disability as a "freak show", he highlights the difficulty of moving the discourse and practice from a medical model to a social approach.

The former sees people with disabilities as abnormal, deviant or inferior, with disability a "personal tragedy". A social approach focuses on the abilities rather than deficits, challenging the disabling environments, attitudes and behaviours of individuals, organisations and societies.

Without this transformation, the vision espoused in the IPC Accessibility Guide to improve host city accessibility and attitudes towards people with disability will remain a distant aspiration rather than a reality.

The Paralympic Games will never be a panacea for the social issues facing a host city and nation. But can they be a beginning to enabling social, cultural and environmental change?

Rio is a city already facing accessibility challenges. This is after Rio hosted the 2007 Parapan Games and was also involved with the 2014 FIFA World Cup, where accessibility was on the agenda.

The accessibility agenda seeks to be inclusive of the ten different impairment types that compete within the athlete classification system. Yet, accessibility at the Paralympics moves beyond athletes to spectators, officials, employees and volunteers who should be able to move freely, independently and with dignity around the city.

According to the Rio 2016 Accessibility Technical Guidelines, nearly 24% of Brazilians have some kind of disability. So an improvement in accessibility levels not just in Rio, but throughout Brazil, will be one of the biggest and most enduring legacies of the Olympics.

But there are challenges making large cities that have existed for centuries more accessible. Following the 2012 Games, David Bamford noted that London had made improvements to accessibility, particularly with public transport, but there was still more to be done.

For a host city to be accessible for the event and beyond requires a range of facilitating factors, including policies, codes, legislation, funding, strong disability advocacy coalitions and education.

What Rio didn't need was a downturn in its economy that saw it descend into a recession in the lead-up to the Games, and political turmoil that resulted in the impeachment of its President between the Olympic and Paralympic Games.

Sally Swanson, an architect and registered journalist at the Games, sponsored by Disability Rights Education & Defense Fund, told us via personal correspondence that accessibility was not factored into planning for the Games and was only implemented after the construction was completed. The exceptions she noted were the athlete's village and the integration of the transportation system.

Together with others on the ground in Rio, we note a few examples that highlight the gaps in planning, design, construction, funding, operations and management of accessibility.

There have been many efforts to enhance accessibility, but existing infrastructure makes universal accessibility difficult. In the Fort Copacabana area, where the triathlon and marathon are held, there are kilometres of black and white "Portuguese pavements".

These tell some of the history of the land, but in reality, they have not been well maintained. The surface is often undulating, tiles are missing and they are very slippery when wet or sandy.

There are also limited public toilet facilities in Fort Copacabana, none of which are accessible. However, many retail stores and cafes in the area have made an effort to have ramps available to improve access.

There is a new subway line L4 that was 30 years in the planning. It was opened in time for the Games and is for exclusive use of accredited personnel and ticket holders during the event. With 15 new trains, the poster behind the barrier (see image right) boasts "agility is first", but agility for whom?

There is good lift access and tactile tiles, but when these became active, it is clear that the message has not been conveyed to operational managers as to what tactile tiles are for. Barriers to manage pedestrian flow were placed across the tiles.

Services were also cut back before the Paralympic Games as a cost saving measure.

In Barra Olympic Park, in front of the entry to Main Press Centre, there was a trip hazard that was unmarked. No one seemed concerned, nor was anyone doing anything about it.

As noted by Sally Swanson in personal communication, the curb cuts in the Park were also installed after construction and were not marked for vision-impaired.

At the Rio 2016 Paralympic Opening Ceremony, the final torch bearer who used a wheelchair had to push himself up a ramp that appeared to well beyond the 5-6.25% of incline as recommended Rio 2016 Accessibility Technical Guidelines. Of further concern was whether it was of a suitable surface given the heavy rain that came over the stadium as he ascended the final ramps.

In the week prior to the Paralympic Games, Brazilian mainstream media was mostly highlighting stories about personal triumph, of how Paralympic athletes have suffered and overcame personal barriers to be where they are.

Even with the large number of people with disability in the country, there were no discussions about diversity and social topics surrounding disability. These conversations continue to be omitted in mass media, which appeals only to individual efforts of the "warriors" as the way to overcome hurdles they face due to their disability.

There were a few exceptions, such as the history of Natalia Mayara, a Brazilian tennis player who wants to be acknowledged not by her life dramas but as an elite athlete. These may be indicative that there is room for positive changes in the social imagination.

Public TV (TV Brasil) is covering most of the games live, but few people access it, and the new government after Dilma Roussef's impeachment is planning to reduce or even to close this very important public vehicle.

In the lead up to the Games, the IPC ran workshops for tourist organisations and tourism businesses on the opportunities for accessible tourism.

The international media spotlight also brings with it initiatives such as the Accessible Rio City Guide by Lonely Planet. The guide was developed in conjunction with IPC support and is provided free on the Lonely Planet website.

While developed with the dual idea of servicing both athletes and visitors with disabilities, the guide also provides a certain amount of corporate social responsibility cachet for both organisations.

How will we know if there is an accessibility legacy? Within Rio and Brazil this may involve the improved visibility of people with disability in life but without baseline research on current levels of social participation how will we know improvements have been made? Another KPI might be to look at the growth in competitors and countries at successive Paralympics, if there are more athletes and/or more countries then this might be a signifier of the increasing accessibility of the International Paralympic movement.

One missed opportunity is the training of the 70,000 passionate volunteers as "game-changers" for access. Typically, disability is just a small fraction of the overall volunteer training (which may be less than three days per volunteer). We are not even sure that accessibility is addressed in the training at all.

If volunteers were given more training in accessibility and disability, which could be done very simply and cheaply via online training such as with Vancouver 2010 and Rio 2016, they could also become the "game changers" for access in their communities after the Games.

It's important we remember that accessibility does not happen by accident, it happens by design.