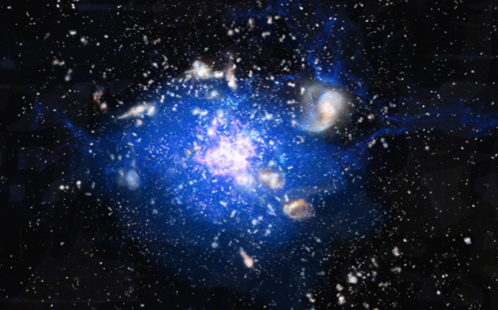 Giant galaxies may grow from cold gas that condenses as stars rather than forming in hot, violent mergers.

The biggest galaxies are found at the hearts of clusters, huge swarms of galaxies.

"Until now we thought these giants formed by small galaxies falling together and merging," said team member Professor Ray Norris of Western Sydney University and CSIRO.

But the researchers, led by Dr Bjorn Emonts from the Centro de Astrobiología in Spain, saw something very different when they looked at a protocluster, an embryonic cluster, 10 billion light-years away.

This protocluster was known to have a giant galaxy called the Spiderweb forming at its centre.

Emonts' team found that the Spiderweb is wallowing in a huge cloud of very cold gas that could be up to 100 billion times the mass of our Sun. Most of this gas must be hydrogen, the basic material from which stars and galaxies form.

Earlier work by another team had revealed young stars all across the protocluster. The new finding suggests that "rather than forming from infalling galaxies, the Spiderweb may be condensing directly out of the gas," according to Professor Norris.

The astronomers didn't see the hydrogen gas directly but located it by detecting a tracer gas, carbon monoxide (CO), which is easier to find.

The Very Large Array telescope in the USA showed that most of the CO could not be in the small galaxies in the protocluster, while CSIRO's Australia Telescope Compact Array saw the large cloud surrounding the galaxies.

"This is the sort of science the Compact Array excels at," Professor Norris said.

Co-author Professor Matthew Lehnert from the Institut Astrophysique de Paris described the gas as "shockingly cold" – about minus 200 degrees Celsius.  "We expected a fiery process – lots of galaxies falling in and heating gas up," he said.

Where the carbon monoxide came from is a puzzle. "It's a by-product of previous stars but we cannot say for sure where it came from or how it accumulated in the cluster core," Dr Emonts said.  "To find out we'd have to look even deeper into the Universe's history."

This figure is licensed under CC BY 4.0 International License