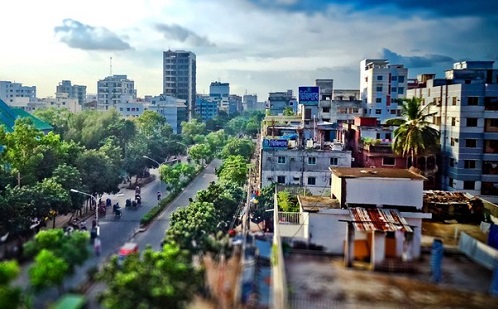 The following opinion piece by Dr Teresa Swist, David Sweeting and Dr Liam Magee from the Institute for Culture and Society was first published on The Conversation.

This isn't to suggest these measures do not have their uses. The very growth of the urban measurement industry points to the productive diversity of world cities. It also illustrates how cities are internally diverse, even contradictory, in character.

This is especially true in Dhaka. On the back of high GDP growth, standards of living for Dhaka's middle class have risen considerably. At the same time, informal settlements have also grown.

Based on Bangladesh's 2014 census, it was calculated that 1.06 million people are living in slums in the Dhaka division. This number "has increased by 60.43% in the last 17 years". Unofficial estimates of the number of slum residents are much higher, around 3.5 million.

Across the developing nations, around one-third of city residents live in slums. A 2013 Rockefeller Foundation report suggested that rather than focusing on a linear vision of "world-class cities", planners and policymakers should adopt an alternative lens of "hybrid cities", in which:

"… informal economies are directly integrated into city planning and priorities."

This requires inclusion of social movements and grassroots organisations that exist in and around informal economies. Secure housing, political recognition, legal protections and well-funded health and education programs are minimal measures for how this might be realised.

As cities trumpet their liveability, creativity and greenness, informal settlement activities are often relegated to the shadows. The Rockefeller report suggests this is not only a problem for social justice or political representation, but also for economic growth.

A hybridised city looks to light up those areas where communities are already bringing together existing needs, new ideas, vigorous debate and innovative possibilities. John Thakara observes that informal settlements have a "DIY urbanism", which has implications for urban design, planning and development:

"The shadow economy is more fragmented, and more reliant on social networks, than the formal one – but it is no less dynamic for that. Because social practices are a key part of this urban transformation, the tasks of design are mutating."

An integrated approach would recognise how these practices – and associated urban planning processes – respond inventively to the limits and loopholes of rapidly expanding cities. According to the Rockefeller report, such limits include:

"… information asymmetries in the labour market that prevent equitable access to jobs; and insufficient access to resources (for example, skills, finance and markets) that enable growth."

Kolorob is an urban innovation initiative stemming from a multi-sectoral collaboration with the communities of two slums in Mirpur, Dhaka. Young people have been integral from the start as mappers and facilitators to collect data about services and involve communities in the application's design.

A Bangla word meaning "clamour" or "noise", Kolorob is aimed at amplifying the diverse voices and inventive practices of these informal settlements. It builds on the immediate strengths and networks of these communities to help meet their need for information about services, jobs and opportunities in a rapidly growing city.

The main features of the GooglePlay app include an interactive map about essential services in the two informal settlements. Kolorob also provides detailed information, a feedback system and a comparison tool.

We are exploring the expectations, experiences and reflections of community members involved in co-designing the app. Discussions with young people highlighted how they strongly value:

increasing smartphone penetration and usage in their communities;

making the variety of local services more visible, providing in-depth detail about these, and using community feedback to enhance decision-making; and

beginning to promote informal jobs to increase opportunities and autonomy for informal-sector workers.

Our initial research into the co-design of Kolorob has found significant scope for participatory platforms to enhance access to existing services and employment opportunities in these areas. They also generate the potential for broader capacity-building by linking people to skill development and institutional support where available.

How such technology platforms can be maintained and leveraged in continued partnership with such communities is critical. This experiment connects with similar conversations in other cities and through other networks. One prominent example is the Platform Co-operativism movement, which includes Refugees Work in Germany, Sensorica in Canada and Enspiral in New Zealand.

A range of policymakers, politicians, researchers and community organisation representatives are now converging on the UN's Habitat III conference in Quito, Ecuador. Key to the conference is the adoption of a New Urban Agenda. This aims to be:

"… an action-oriented document which will set global standards of achievement in sustainable urban development, rethinking the way we build, manage, and live in cities through drawing together co-operation with committed partners, relevant stakeholders, and urban actors at all levels of government as well as the private sector."

The role of information and communication technology in this invites not only close attention but novel collaborations. For instance, a 2015 report highlights several hurdles to overcome:

As a platform, Kolorob is still in its early development stage. But there is interest from existing and new multi-sectoral partners in exploring the potential of scaling it up within Dhaka, as well as across other South Asian megacities.

Rather than focusing on artificial solutions based upon improving world-class cities, we need to turn the spotlight to inclusive ICT platforms that contribute to both informal and formal economies. We can then begin to meet the wider social and political needs of hybrid cities.