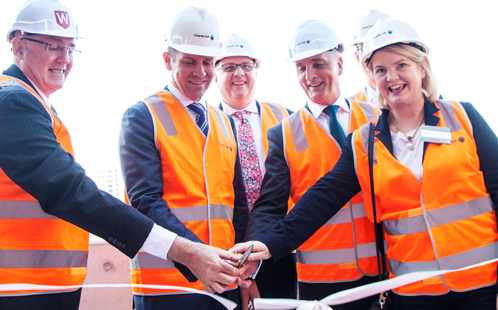 'Topping out' is a long-held tradition in the construction industry that officially marks the last beam or structural element placed atop a building. It often involves planting a tree atop the structure, to celebrate and signify the construction reaching its highest point.

The high point of Western Sydney University's new Parramatta City campus has now been reached, with the University coming together today with the building's owners and builders to mark the end of the construction phase for the $220.5 million commercial development – set to become the University's first ever vertical campus, and a flagship building in Sydney's west.

Joining the University's Vice-Chancellor Professor Barney Glover for the topping out ceremony was NSW Premier and Minister for Western Sydney, Mike Baird, and Charter Hall's Head of Office Development, Andrew Borger, together with other special guests and members of the University community. 1PSQ will offer first class educational facilities for up to 10,000 students, and officially opens in 2017.

"Parramatta is a city on the move and today we have reached a significant milestone on one of the region's key developments. Parramatta is the geographic heart of Sydney and the new Western Sydney University campus will allow nearby residents to work and study closer to where they live," Mr Baird said.

"The investment in this project by Charter Hall, [builder] John Holland and Western Sydney University is providing hundreds of jobs during construction and it will continue to drive the local economy once it is completed."

Vice-Chancellor, Professor Barney Glover, said 1PSQ will be one of Australia's most digitally infused and technology-rich teaching and research spaces.

"It was less than 18 months ago when we joined with NSW Premier Mike Baird to turn the first sod to mark construction on this site. Progress has been swift, and as we near the completion of the building phase, we are particularly excited for the internal fit-out to begin," said Professor Glover.

"The 10,000 students who will study here will find themselves immersed in one of the country's most technologically-advanced learning environments – one that is highly interactive, and which uses personalised technologies and approaches to significantly enhance the student experience.

"Importantly, the campus' connection to the civic heart of Parramatta will provide a unique student experience and encourage even greater engagement between the University, business and the community. Together, we are proud to make Parramatta a true university city."

"Western Sydney University have been visionary in their pursuit of creating new ways for students to learn, and in partnership with Charter Hall are delivering a bespoke teaching facility at 1PSQ. We are proud to highlight that 1PSQ is being delivered to a fantastic quality as well as on time and on budget," added Charter Hall's Head of Office Development, Andrew Borger.

The building, located on the corner of Smith and Macquarie Streets in the Parramatta CBD, comprises approximately 26,500 square metres of commercial office space across 14 floors.

"The topping out of the WSU tower is also a major milestone for the $2 billion Parramatta Square project, which will be a showcase for Smart City technology and the benchmark for future development in Parramatta," Ms Chadwick said.

"From early 2017, the tech-savvy students of this campus will be perfectly placed to benefit from the transition that is taking place in Parramatta, as it fulfils its role as Australia's next great city."