Young engineers pave the way to their future 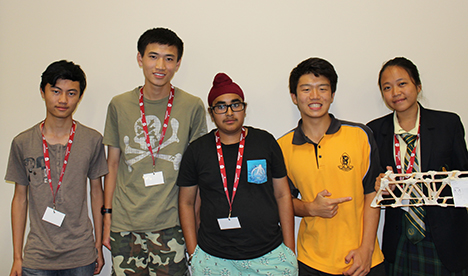 A two-day event at Western Sydney University's Kingswood campus within the school of Computing Engineering and Mathematics, sponsored by Engineers Australia, saw 124 students from 20 schools in attendance.

The Engineering Frontiers program consisted of lectures, laboratory sessions and a bridge building competition, where students had to build a light and strong model bridge able to carry weight that ultimately breaks it down.

Along with the always entertaining engineering quiz between schools that covered topics in civil, mechanical, electrical, electronics, robotics, water, environmental and communications engineering.

Dr Ragbir Bhathal, Chairman of the Organising Committee of Engineering Frontiers 2015 says "with Western Sydney currently developing its infrastructure at a rapid rate, there will be a large need in the workforce for engineers in the coming years.

"Australia is short of engineers and with the building of Badgerys Creek Airport on our doorstep it is important that we get students from Western Sydney to study engineering and get the exciting jobs in the industries that are going to pop up in and around the airport," he says.

The program also included the highly engaging build a bridge challenge, won by Team Six including students from Penrith and Prairiewood High Schools.