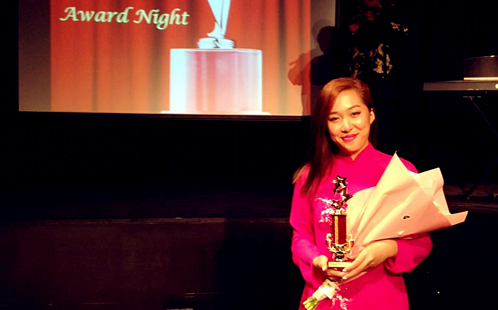 The University of Western Sydney has continued to impress at a prestigious international Chinese language competition, reflecting the consistently excellent performance of the students and the UWS Chinese program.

UWS student Tram Phan was awarded second place at the Chinese Bridge Competition, meaning UWS has either won or placed second in the Australian leg over the past seven years.

Tram Phan, a Chinese Major student at the UWS School of Humanities and Communication Arts, joined contestants from across Australia for the global language and cultural competition for non-Chinese learners at universities

During the competition, Ms Phan advanced through three competitive rounds, starting with self-introduction and progressing to Chinese speech and talent performance. Her speech "My Chinese Dream" was particularly well received.

The Dean of Humanities and Communication Arts Professor Peter Hutchings has paid tribute to Ms Phan, and says her result reflects well on the University's commitment to producing global students.

"UWS is committed to expanding its international reputation and reach, and our students are central to this," says Professor Hutchings.

"Ms Phan's exceptional achievement comes after UWS students won the previous two Chinese Bridge competitions, and on behalf of the University I would like to congratulate her on doing so well."

The Head of the UWS China Liaison Unit Dr Ruying Qi says the fantastic result was a team effort.

"Tram has only studied Chinese for two and a half years, and in the past two months received close assistance from UWS tutor Lijiang Zhao, who generously dedicated long hours to help improve her performance," says Dr Qi.

"With this tremendous team and institutional effort, we are able to deliver one of best Chinese programs in Australia to build a solid foundation for our students."