UWS announces the Women of the West nominees for 2015 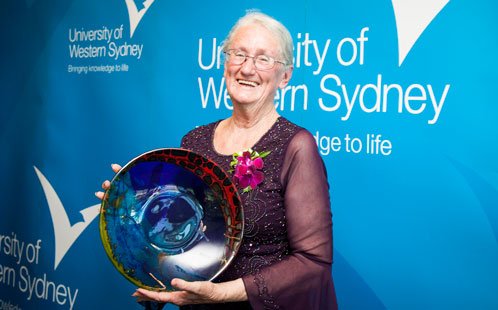 Aunty Francis Bodkin, winner of the 2014 Women of the West award

Whether it be advocating for young people with autism, supporting the elderly in our local Aboriginal communities, or providing a compassionate shoulder for those dealing with pregnancy or infant loss, this year's finalists for the UWS Women of the West Awards all share one thing in common – a desire to make a difference.

Fifteen awe-inspiring women from Greater Western Sydney have been selected as the finalists for the 2015 Women of the West Awards. The women come from a diverse range of fields and backgrounds, including the arts, health, education, business and not-for-profit sectors.

The University of Western Sydney established the Awards in 2005, to show its appreciation for the many – ­often unsung – women who are improving the lives of people in Greater Western Sydney.

The winners will be publicly announced at a special ceremony being held on Friday 6 March, with winners of each category receiving a grant of $5000 to further develop their leadership and advocacy work.

UWS Vice-Chancellor Professor Barney Glover says the University is pleased to mark International Women's Day by shining a light on the many women who are doing great things in western Sydney.

"Once again, we have an outstanding group of Women of the West finalists this year, who are all making significant contributions to the region in their own unique ways," says Professor Glover.

"Their nomination reflects the high regard that friends, colleagues and community members have for them, both personally and professionally. On behalf of the UWS community, I congratulate all our Women of the West nominees for this year on their outstanding achievements."

The award ceremony on Friday 6 March will be held at the UWS Parramatta campus, beginning at 3.30pm, as part of the University's International Women's Day celebrations.

Dr O'Brien leads Australia's major education-oriented children's charity and has driven a five-year plan to grow the effectiveness and reach of The Smith Family's programs to support more disadvantaged children and young people.