UNLIMITED triumphs in the Red Centre 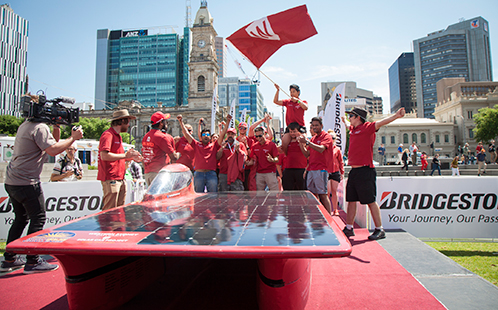 The 150 kilogram car, called UNLIMITED, lived up to its name and used only the sun's power to travel between Darwin and Adelaide in 46 hours 51 minutes.

This is the second time Western has entered a team in the world's largest and toughest solar race. Competing against 30 contestants in the Challenger Class, Western's Team was pitted against long-time entrants from The Netherlands, USA and Japan who are ranked the best in the world.

UNLIMITED crossed the finish line without having to hitch a ride on a trailer, meaning it completed the entire 3,000km race under solar power and was ranked according to time.

Seven vehicles in the Challenger Class had to be trailered for part of the race and two didn't reach the finish line.

Western Sydney University is proud of the achievements of our Solar Car Team.