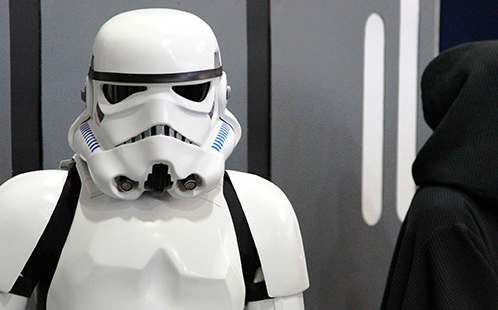 Associate Professor Craig Ellis has two styles of suit hanging in his closet: the standard business variety befitting a professor at Western Sydney University, and another that is – well, shall we say – more at home in a galaxy far, far away.

When he's not working at the University, you can often find Craig hanging with other members of the 501st Legion – a worldwide collective of costume players who dress up as their favourite villains from the 1977 blockbuster, Star Wars.

They are part of a phenomenon that sees tens of thousands of Star Wars enthusiasts create stunningly accurate costumes based on the iconic film.

It's a fair bet that Craig's scary-looking stormtrooper outfit is going to be on a higher rotation than usual over the coming weeks, with the highly-anticipated next instalment in the franchise, Star Wars: The Force Awakens, about to finally hit our screens.

For Craig, like most children of the '70s, his obsession with director George Lucas's creation started early. He recalls the moment as a ten-year-old he went to see Star Wars for the first time, and was transported to a galaxy inhabited by the likes of Darth Vader, Luke Skywalker, Han Solo, Princess Leia and Obi-Wan Kenobi.

"That first scene in Star Wars was just unlike anything I'd ever seen before," remembers Craig. "The rumble of the Star Destroyer as it flew overhead, the stormtroopers, and the first appearance of Darth Vader… it really captured my imagination."

And it's fair to say it has been doing so ever since. Craig's authentic stormtrooper outfit is made from vacuum-formed ABS plastic, using moulds created by overseas armour makers who based the design on the genuine costumes and moulds from the film.

The intricate costume was constructed from 77 individual pieces, and took Craig seven months to painstakingly build and fit perfectly to his frame.

It goes without saying it's not the easiest outfit to wear to parties (even sitting proves to be a challenge) but that doesn't stop Craig and his mates from the 501st Legion using their "bad guy" popularity to do good.

They spend many a weekend putting in appearances at fetes, conventions, children's hospitals – yes, even weddings – in character, raising money for events like the MS Walk, Relay For Life and organisations like the Black Dog Institute.

For Craig, the intergenerational popularity of Star Wars is explained rather simply: it's a great story, well told.

And as a business school professor, he also understands perhaps more than most the sheer economic force that is 'Star Wars Inc', and the mass marketability of a film that continues to be one of the most heavily merchandised of all time.

"George Lucas really understood the power of pop culture, serialisation, and building his audience through licensing and merchandising," says Craig.

"He was one of the Hollywood directors that emerged from that era who was heavily involved in the 'business' side of movie-making, and established their own production companies outside the traditional studio system.

"The enduring appeal of Star Wars, and why it continues to create a whole new generation of fans, is that it has great characters, big melodrama, and just visually transports you to another world."

So, if you happen to find yourself sitting next to a somewhat uncomfortable-looking stormtrooper in the cinema tonight or over the coming weeks, look a little closer. You never know who might be under that helmet.