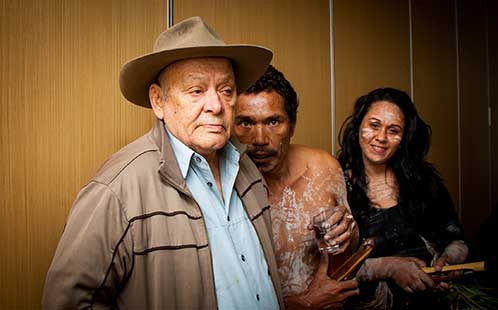 Each year staff and students at the University of Western Sydney come together to commemorate National Sorry Day on May 26 followed by Reconciliation Week.

During this time, we recognise two significant historic events in the nation's journey towards reconciliation: the anniversaries of the 1967 Referendum and the Mabo Decision in the High Court.

A series of activities are held on UWS campuses throughout the week. On Tuesday, Vice-Chancellor, Professor Barney Glover welcomed staff and students at the Werrington North Campus to a special morning tea held to commemorate National Sorry Day.

Aboriginal Elders and entertainers shared their cultural knowledge and spoke about Aboriginal history in Australia. Special guest speaker and Senior Elder, Uncle Wes Marne, spoke about the importance of storytelling and family kinship.

He also spoke poignantly about his life experiences and what it was like growing up as an Aboriginal in Australia.

Born in 1922, Uncle Wes experienced firsthand, the challenges of growing up at the Dead Bird Aboriginal Mission, near Inverell, NSW where his family was sent in 1932 by the government.

Limited schooling, a separate outdoor classroom and a rope which segregated students in the schoolyard were just some of the limitations imposed on Aboriginal children of that era who attended the local school, he recalled.

Throughout the rest of Reconciliation Week, the UWS team for the National Indigenous Tertiary Education Student Games will be holding a sausage sizzle on each campus to promote reconciliation and its involvement in the upcoming Games.