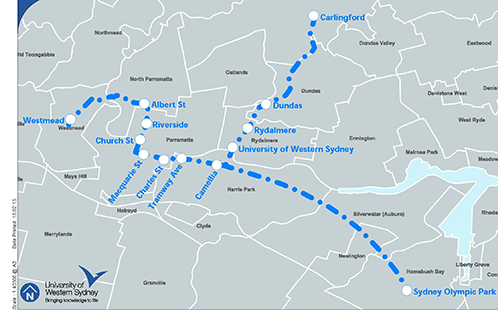 The critical first stage of the much-needed Western Sydney Light Rail Network should be a 'smart' route linking the employment and residential precincts of Westmead, Carlingford, Camellia and Olympic Park, according to the University of Western Sydney.

With four potential light rail corridors currently under consideration, UWS Vice-Chancellor Professor Barney Glover says the party that forms government after the 28 March election has the opportunity to settle on a route that can deliver maximum benefit to taxpayers and the western Sydney economy.

The University's preferred route starts at Westmead, and winds its way through a potential arts and cultural precinct in the Parramatta CBD, through the city's justice precinct, then across to Rosehill and Rydalmere, and on to Carlingford. Importantly, the route would incorporate a 'spur' that runs directly from Camellia through to Sydney Olympic Park.

Professor Glover says the mobility of the knowledge-job workforce in-and-around these identified 'smart' precincts is critical in achieving the ambitious objectives the Premier has set out for western Sydney.

"Smart cities are connected cities, in every sense of the word," he says.

"Our preferred route not only addresses the region's immediate needs, but also serves to support the development of much-needed residential, commercial and industry development between Parramatta and Homebush."

Professor Glover says that to be a truly 'smart' transport initiative it is vital that the light rail is complemented by sustainable modes of transport, such as cycleways, dedicated pedestrian flows, more heavy rail services, and vehicle reduction incentives.

The launch of the University's Parramatta Square campus in 2017 adds to the case for the 'smart' route, he says.

"If we are to draw international students to the region, then we must be able to provide them and local students with a truly world-class transport system," says Professor Glover.

"Naturally, as per global standards, free wi-fi access across the route would be a given.

"Whichever party forms government post-election, they will be in the unique position of being able to activate pivotal connections that will be an ongoing driver of the region's 'smart' economic development."