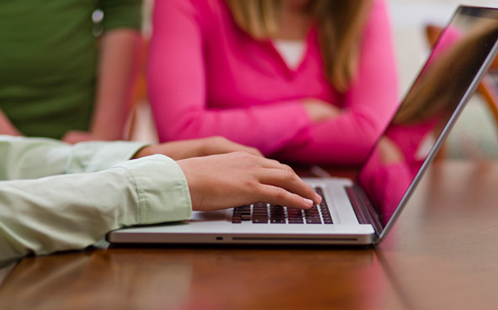 The following opinion piece, by Dr Teresa Swist, Associate Professor Amanda Third, and Dr Phillippa Collin, from the Institute of Culture and Society and the Young and Well Co-operative Research Centre was first published by The Conversation.

The way children and young people use social media is often portrayed in the mainstream media via stereotypes in a way that inspires fear and concern.

Adults are often portrayed as either ignorant of young people's use of social media or skillful cyber-predators, while children are often perceived as experts or empty vessels: if they're not empowered, then they're exploited.

Why do we tell these modern day horror stories? These stories often focus on potential harms without acknowledging the benefits that can emerge from the social relations enabled by technology.

While it is important to recognise the very real dangers associated with social media use, it is equally important to identify and leverage the benefits by taking a more holistic approach.

Dimensions of social media use

The biggest challenge is in understanding the diverse dimensions of media use without pathologising children, young people or adults. Our recent literature review for the Commissioner for Children and Young People (Western Australia) builds on previous research and highlights the range of factors influencing how children and young people use social media.

The technical dimension is the most common focus: who goes online, how often and with what hardware and software?

The material dimension takes into account the digital traces generated by social media practices and includes the content produced by children and young people through sharing and uploading, as well as consuming and downloading.

The AU Kids Online study found that "although creating content is generally less common than receiving content, Australian children do this more than in many other countries".

The social dimension refers to the interactions of networked people, places and information that extend children and young people's connections to diverse communities and ideas.

Australian children have more social network contacts than their EU counterparts, with 16% (compared to 9% of European children) reporting that they have over 300 contacts.

The motivational dimension refers to the diverse aspects of children and young people's social media use which can span friendship, maintaining relationships, expressing themselves as well as discovering new information and ideas.

For example, social networks and other forms of social media are viewed as central to a sense of acceptance and belonging for children and young people who experience discrimination or exclusions, for instance due to homelessness, or chronic illness, a serious condition or a disability.

While each of these dimensions deserves scrutiny, a holistic approach recognises that they are interwoven and can provide a richer picture of children and young people's everyday practices.

We need mechanisms such as the new Office of the Children's eSafety Commissioner to help promote digital literacy and deal with offensive and harmful digital practices, but these must be aligned with holistic approaches.

Nationally and internationally, there are initiatives underway to consider how to use the benefits of digital engagement to minimise the potential harms.

For example, in Australia, more than 75 organisations are collaborating in Young and Well Cooperative Research Centre research, which is leading to new evidence, improved policies, programs, tools and parenting/professional practices that maximise the benefits of young people's online engagement.

Our report highlights the complexity of children and young people's social media use and the need for researchers, policymakers, services and care-givers to work with young people to maximise the benefits of their experiences.

In order to explore and understand the issues being raised in the context of social media use, we need to promote intergenerational dialogue: focusing on building young people's capacity to recognise and deal with risks online in order to foster their resilience and help them leverage the positive aspects of their technology use.

In her book, It's Complicated: The Social Lives of Networked Teens, Danah Boyd argues that:

Rather than resisting technology or fearing what might happen if youth embrace social media, adults should help youth develop the skills and perspective to productively navigate the complications brought about by living in networked publics.

To achieve this, let's think multidimensionally rather than deterministically. This week at the Australian Internet Governance Forum the Children's eSafety Commissioner, Alastair MacGibbon noted it is how we use the technology that matters. Our policy, program and legal responses must be informed by understanding of the technical, material, social and motivational dimensions of children and young people's social media use rather than simple regulation, surveillance and control.

Most significantly, parents, carers, policymakers, the media and institutions need to become more aware of the advantages of young people's connectivity.

This requires moving from a reactive position, striking fear into the hearts of young people, and attempting to control their digital practices, toward proactive practices which acknowledge young people's expertise and the integral role of digital media in their everyday lives. Scare-mongering isn't helping anyone.