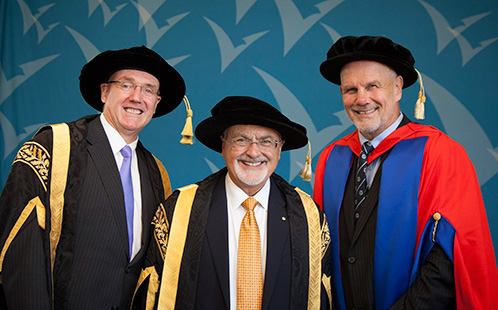 After completing high school, Dr FitzSimons accepted an American Field Service Scholarship to go to Ohio for a year. He returned to Sydney to complete an arts degree at the University of Sydney, majoring in government and political science.

Dr FitzSimons joined the Sydney Morning Herald full-time in 1989 and has been one of their most popular columnists since. He has been a sports columnist for that publication since 1987, and regularly appears on the Australian Foxtel program, The Back Page, hosted by rugby league journalist Mike Gibson.

Following club rugby seasons with the Sydney University Football Club and the Manly Rugby Union Football Club in Sydney, Dr FitzSimons played with CA Brive, a French rugby union team, between 1985 and 1989. He played seven Tests at lock for Australia between 1989 and 1990, debuting against France on the Wallabies' 1989 tour of Europe. Five of his career international appearances were against France and his final Test match was against New Zealand in Christchurch.

He is the biographer not only of World Cup winning Wallaby captains, Nick Farr-Jones and John Eales, but also former Opposition Leader Kim Beazley, boxer Les Darcy, aviator Sir Charles Kingsford Smith, war heroine Nancy Wake, and Antarctic explorer Sir Douglas Mawson. In 2001 he was Australia's biggest selling non-fiction author, and duplicated that feat in 2004, with his book on Kokoda.
Dr FitzSimons is, or has been, involved with several organisations as a patron or board member, including: Patron of AFS Intercultural Programs Australia; Fellow of the Senate of the University of Sydney, where he has just commenced a term as a Pro Chancellor; Board member of the Sydney Writers' Festival; Council member of the Australian War Memorial; and Member of the ANZAC Centenary Advisory Board.

In 2011, Dr FitzSimons was named a Member of the Order of Australia for service to literature as a biographer, sports journalist and commentator, and to the community through contributions to conservation, disability care, social welfare and sporting organisations.