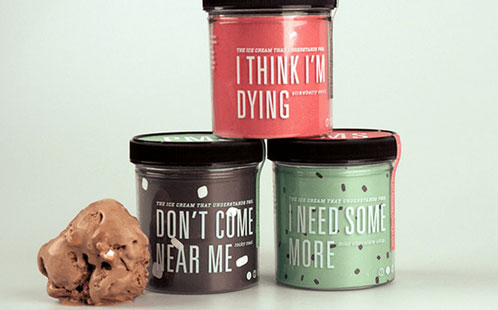 The following opinion piece, by Professor of Women's Health Psychology Jane Ussher, was first published in The Conversation.

Premenstrual stress (PMS) runs the gamut of minor inconvenience to severe life-disrupting distress. So is the packaging for a range of ice-cream that understands PMS created by a 21-year-old American graphic designer funny, offensive, or something else entirely?

Emblazoned with the declarations "I need some more", "Don't come near me" or "I think I'm dying", PMS ice-cream is available in Rocky Road, Strawberry Swirl or Mint Choc Chip. But it asks its consumers to break the seal only in "extreme cases of PMS".

The work is the brainchild of Texan Parker Jones, who says she "wanted to do a project that showed a humorous side of PMS … how it affects women and what we really want to say when we just don't feel good."

Jones is not the first to parody PMS through creative work. Others have used art, film or grrl blogs to subvert the stigma surrounding premenstrual mood change and to caricature premenstrual madness.

They follow the long tradition of menstrual art and poetry, which challenge the taboo of visible menstrual blood - causing controversy in the process.

American feminist artist Judy Chicago was the first, depicting a used tampon in her 1971 photographic lithograph, Red Flag. She caused an uproar.

And Instagram recently banned a photographic representation of menstrual blood leaking from a reclining woman, showing some things never change. We're not supposed to break the silence and secrecy surrounding women's bleeding bodies.

Some young women embrace PMS as a part of their lives and would probably be happy to indulge. In our research we have interviewed young women who openly express irritation and annoyance premenstrually, with no sense of shame.

Women in their 30s and 40s express more ambivalence about premenstrual moods. Some feel bad about irritation or anger expressed at partners or children premenstrually. Others feel guilt about their desire to be alone and escape family demands.

Many say their true feelings come out once a month. One woman told us she gets "angry on behalf of all women everywhere who have to pick up after everyone else". It's only when she "has PMS" that she expresses it.

The negative emotions some women feel premenstrually are no joke. A minority experience severe distress, which impacts on their daily lives. Hormonal and endocrine changes can create greater vulnerability to life stresses, in particular relationship difficulties.

Absence of support from a partner, misbehaving children or experiencing multiple demands are common triggers for premenstrual irritation and anger.

For some women, the anger builds up all month, as they try to live up to impossible ideals of the calm, kind and caring woman who is always in control. When they are premenstrual, it can all feel too much, and repressed feelings come out.

All of the women we talk to in our research have legitimate reasons for feeling upset or angry. It's neither just hormones nor "all in the mind". Rather, it's an understandable reaction to life experiences at a time when some women feel their defences are down.

PMS ice-cream potentially belittles these difficult emotions and women's efforts to cope with them.

Self-care is the most effective way to deal with negative premenstrual emotions. Women who take time out for themselves, spend time doing things they enjoy and are able to absolve themselves from responsibility for a few days each month find their premenstrual distress is reduced. Exercise and a good diet also help.

Notably, few women experience PMS when they are on holiday, demonstrating the role of life stress.

So could PMS ice-cream be a good thing, encouraging women to take time for themselves to indulge in the cravings for sweet things common at this time? Perhaps.

It may serve to normalise premenstrual change and signal to a male partner that a woman wants to be left alone. It could also ensure that women living with men have ice-cream available to eat. What man would dare raid the freezer and eat PMS ice-cream? He'd have to be brave – or foolish – indeed.