The following article, by Professor David Rowe, from the Institute for Culture and Society, was first published on The Conversation.

This ought to have been a good time for women in Australian sport. The women's cricket team is on the cusp of regaining the Ashes in England after the men's abject surrender of theirs. Australia won the Netball World Cup in Sydney amid plenty of media coverage and decent attendances, including a world-record netball crowd in the final. The Campbell sisters swam well and won medals at the recent world swimming championships in Russia.

But, as so often happens, for every positive story about women and sport there are ugly reminders of just how heavily the odds are stacked against them. Sport stubbornly remains, at heart, a man's world.

This view is central to the cricket WAGs (wives and girlfriends) controversy, in which a desperate search to explain the underperformance of the men in the Ashes series homed in on the presence of partners on tour. This intrusion, Test great Ian Healy suggested, broke the sacred bond of mateship essential to success in men's team sport.

Once again, it was proposed that women are essentially a distraction for elite sportsmen. In order to allow their men to focus, they – and any accompanying children – should be invisible for the duration of combat. It seems that any reminder that there is actually life and responsibility outside the dressing room is just too much to handle for male sporting single-taskers.

All that remained was for some antediluvian pundit to resurrect the ancient Greek belief that sex drains men of their vital fluids and so should be banned before a game. This myth persists in many corners of sport, despite the lack of any scientific evidence.

It may be worth noting that none of the four teams that imposed a complete sex ban on their players in the 2014 FIFA World Cup in Brazil made it past the Round of 16. But little seems to shake the belief for some in sport that sex for men is a perk of the job that should be saved for "downtime" – and not uncommonly in the company of teammates.

This is not to say that sex doesn't have its uses in sport, as Australian tennis player Nick Kyrgios demonstrated in using on-court sexual insults as a weapon against his opponent Stan Wawrinka.

The playground taunt that Wawrinka's reported current girlfriend might have had (shock, horror) prior sexual history with another player is the latest in a long line of Stone Age affronts to masculine honour through disrespecting the women with whom they are associated – be they wives, lovers, mothers, cousins or sisters.

One of the best-known uses of this tactic led to the sending off for violent conduct of the French captain Zinedine Zidane (who is of Algerian origin) during the 2006 football World Cup final in Germany. Zidane's headbutt of Italian opponent Marco Materazzi was attributed to the latter allegedly calling him the "son of a terrorist whore" and disparaging his sister.

The former statement was never proven and Materazzi successfully sued several newspapers for printing it, admitting only that he had sexually insulted Zidane's sister.

Whatever Materazzi actually said, it is clear that verbally abusing opponents' close female associates or using sexist language is standard practice in much male sport. But in this case more concern was expressed about the racist connotations of Materazzi's words, and it is often suggested that "mere" sex or gender insults are far less significant than the use of racial epithets.

So, when Indian cricketer Harbhajan Singh allegedly called Andrew Symonds, a UK-born Australian cricketer of African-Caribbean and white parentage, a "monkey" in Sydney in 2008, in mitigation it was stated that he'd actually only called him a "t*ri m*ki" (Hindi for "motherf*cker").

Similarly, in the 2011 on-field confrontation between two English Premier League footballers, Liverpool's Luis Suarez and Manchester United's Patrice Evra, that led Evra to allege that he was racially abused by Suarez, the complainant admitted to a disciplinary inquiry that he'd called Suarez "C*ncha de tu H*rm*na". This is literally translated as "your sister's c*nt", and generally means "you son of a b*tch". 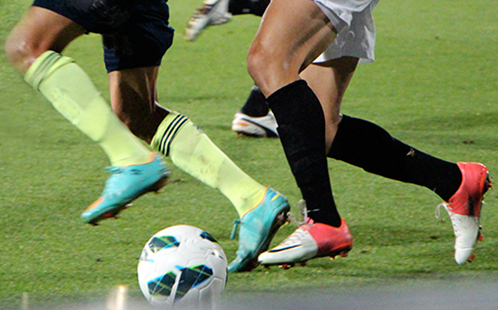 In another case in 2012 involving allegations that Chelsea's John Terry had racially vilified Queens Park Rangers' Anton Ferdinand by calling him a "f*cking black c*nt", Westminster Magistrates' Court heard that the third word was used all the time in football.

Terry told the court that he'd been abused by opponents and crowds about "sh*gging [a teammate's] missus", his mother had been regularly called "a slag", and:

The Liverpool fans made up a song that my mum "loves Scouse c*ck".

Ferdinand, for his part, was unconcerned about sexually abusive swearing. He told the court:

It's handbags, innit – it's what happens on the pitch.

But if this kind of misogynistic atmosphere is allowed to prevail in men's individual and team sports, then all the platitudes about sport being a socially positive force stand exposed.

It is not just sportsmen who have to take some responsibility here. There are plenty of sports bureaucrats, media commentators and fans who need to reconsider their own conduct.

A strong stand has been taken against racism in sport. Although slow to get going, an effective coalition was formed to challenge the racially coded crowd booing of Indigenous AFL player Adam Goodes.

Taking an uncompromising stance against racism in sport is crucial, but there is much less sensitivity towards sexism in sport. Women deserve no less a collective commitment to equality, not least in this self-proclaimed "nation of good sports".